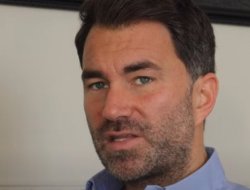 The head of Matchroom Boxing, Eddie Hearn, believes that the fight for the status of the #1 heavyweight fighter between IBF / WBA / WBO champion Alexander Usyk and WBC champion Tyson Fury can still take place next. In terms of, not after Usyk’s mandatory IBF defense against Filip Hrgovic.

Cause? She is prosaic – loot.

Since Prince Khalid and the Saudis want Usyk-Fury to be the next fight, Hearn said, it probably will be. In other words, a Croatian can be offered compensation money. Well, that’s what the functionary seems to be hoping for.

“We have an email from the IBF saying, ‘Start negotiations on Hrgovic vs Usyk. The IBF has a rule that if you don’t want to negotiate, you can go straight to the promotion bidding. So we submitted such a request. We said bluntly that we did not want to negotiate. We are waiting for the date of the auction,” said Hearn
iFL TV.

Interestingly, when Eddie was asked if Philip would get a chance to fight the winner of the fight for the absolute, he did not assure that “of course!”

Usyk and Fury will determine the absolute? The main promoter Hrgovic has the answer

According to the promoter, his task is to move Hrgovic to the title fight as soon as possible.

“Usyk-Fury – yes, this is a big fight for boxing. We recognize that this is an important fight, but we also have to do our job for Philip. So there’s a lot of talk going on behind the scenes and I think we’ll work things out over the next few weeks. To be honest, I think that in general, under the IBF rules, they cannot allow the Usyk-Fury fight. But we know that this is boxing, and we know how the rules for big fights change. Of course Fury vs Usyk is leading now,” Hearn said.

The Ukrainian team shares this opinion and believes that “not everything is so bad.” Like, why are you all nervous: the fight with Fury is not in danger at the moment.

And where Fury lives, they are not sure that they will be able to fight formally for the absolute It is believed that Usyk can “throw out” the IBF belt.