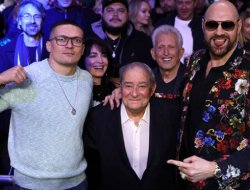 Boxing columnist Mike Coppinger claims that the fight for the title of absolute heavyweight champion between Ukrainian Oleksandr Usyk (20-0, 13 KOs) and Briton Tyson Fury (32-0-1, 23 KOs) will take place not in February, as previously reported, but in March next year.

According to him, the parties had previously planned to hold the fight not in Britain, but in Saudi Arabia. Coppinger
remindsthat in December Fury had an interim fight with compatriot Derek Chisora ​​(33-12, 23 KOs): “We immediately understood that there would be no December fight with Anthony Joshua. At least, this option never seemed to me something real. Even when they started negotiations. After all, it was clear that Fury had only a fight with Usyk for the title of absolute on his mind.

“I was told there are talks going on to do this fight in March in Saudi Arabia. Why did Fury mention Joshua at all? Well, he needed an intermediate fight. Apparently, he thought Joshua would be the right fit for the role. That is, he does not think that the fight with Anthony is some kind of challenge. But only Chisora ​​turned out to be available among eminent, that is, famous boxers in Britain. He is a worthy opponent. But the problem is that Fury has beaten him twice already. The question is, do the fans want to see their third fight?” Reminds me of Coppinger.

According to the observer, “Chisora ​​is a normal intermediate opponent before the fight with Usyk. I don’t see a problem. Remember the first Rocky movie? Fury decided to play the trick, as it was in the movie. He introduced himself as Apollo Creed. That is, a fighter who is much stronger than everyone else. So much stronger that he simply has no one to fight with. And now he is looking for his rivals “Rocky Balboa”. Chisora ​​will just ‘play Rocky’ against Fury’s Apollo.”

Meanwhile, The Ring magazine ranked Wilder at number one in the heavyweight rankings. And age-old Luis Ortiz is very disappointed with Fury’s choice: “You’re a big bum!”

Do not understand why Fury and Chisora ​​need a third fight at all? The expert clearly explained its expediency.