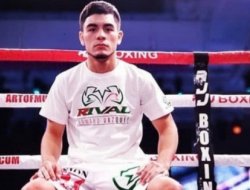 The left-hander from Ukraine started the fight well: he moved, jabbed, threw a lot of badipunches. The American slowly pressed behind a high block, perfectly defended with his body. He soon adapted to Slavinsky’s simple tactics – he countered with lightning-fast unaccented combinations and shifted. He could count on the fact that the referee would record a knockdown in his favor in the 2nd round, but he decided that Slavinsky had slipped. Controversial episode.

The Ukrainian strayed into constant attempts to bring his left plop to the target. At the same time, he often fell over, making it easier for the opponent and unpleasantly surprised him with the lack of defensive skills. Slavinsky began the 5th round aggressively – he increased the density of the fight and the pace. This bore fruit for a short time. Vazquez is still much more effective, and the Ukrainian’s numerous blows fly either nowhere or into a block.