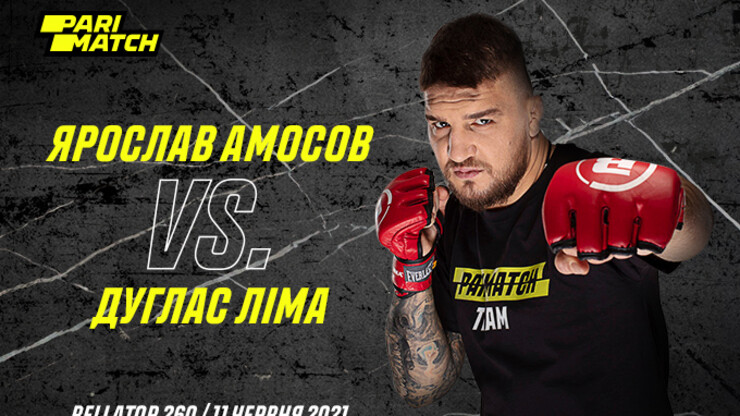 On June 12, Ukrainian Yaroslav Amosov will fight for the Bellator welterweight title. The rival of the undefeated MMA fighter and Parimatch ambassador will be the Brazilian Douglas Lima, who now owns this title.

Parimatch analysts estimate the chances of winning as almost equal. 52% vs 48% in favor of the reigning champion. By the way, Lima has already lost the fight for the Bellator welterweight championship belt three times, but then he managed to win it back. He was able to defend the title only once.

Yaroslav has 25 fights in MMA (of which 6 in Bellator), he won all his fights. Amosov won 19 victories ahead of schedule (9 by knockout and 10 by submission). Douglas Lima had 40 fights, of which he won 32 (14 by knockout, 12 submissions and 6 decisions). He lost 6 times by decision and 1 time by knockout and submission. Lima also lost his previous fight. He lost to Gerard Mousasi for the vacant middleweight title.

Lima works well on the stand, he had problems with wrestlers before, but he has worked on himself well. He has powerful kicks, he is hardy and experienced. Yaroslav Amosov is more title hungry and more motivated. In addition, it should be noted the age difference, Lima is already 33 years old, and Amosov is 27. For Yaroslav, this is a great opportunity to once again declare himself and finally lift the long-awaited trophy over his head. His advantage over Lima in the fight, due to which Amosov received many early victories. If the fight goes to the ground, Yaroslav’s chances of winning will greatly increase.

UFC fighter Marina Moroz: “The Brazilian has a huge list of victories over top fighters. For Amosov, the fight against such a dangerous opponent will be the main test in his career. I wish Yaroslav victory, but objectively I am inclined to win the current champion. My prediction: Lima’s victory, perhaps ahead of schedule “.

Maxim Matzhikov, MMA journalist: “This is the most difficult fight for Amosov in his career. Yaroslav is again an underdog in this fight, but this status only provides motivation to prove to the whole world that he is the elite of world MMA. It will be very difficult for Yaroslav, because Douglas Lima – an elite level fighter with a lot of experience in great fights… I can say for sure that this fight will go down in history!”.