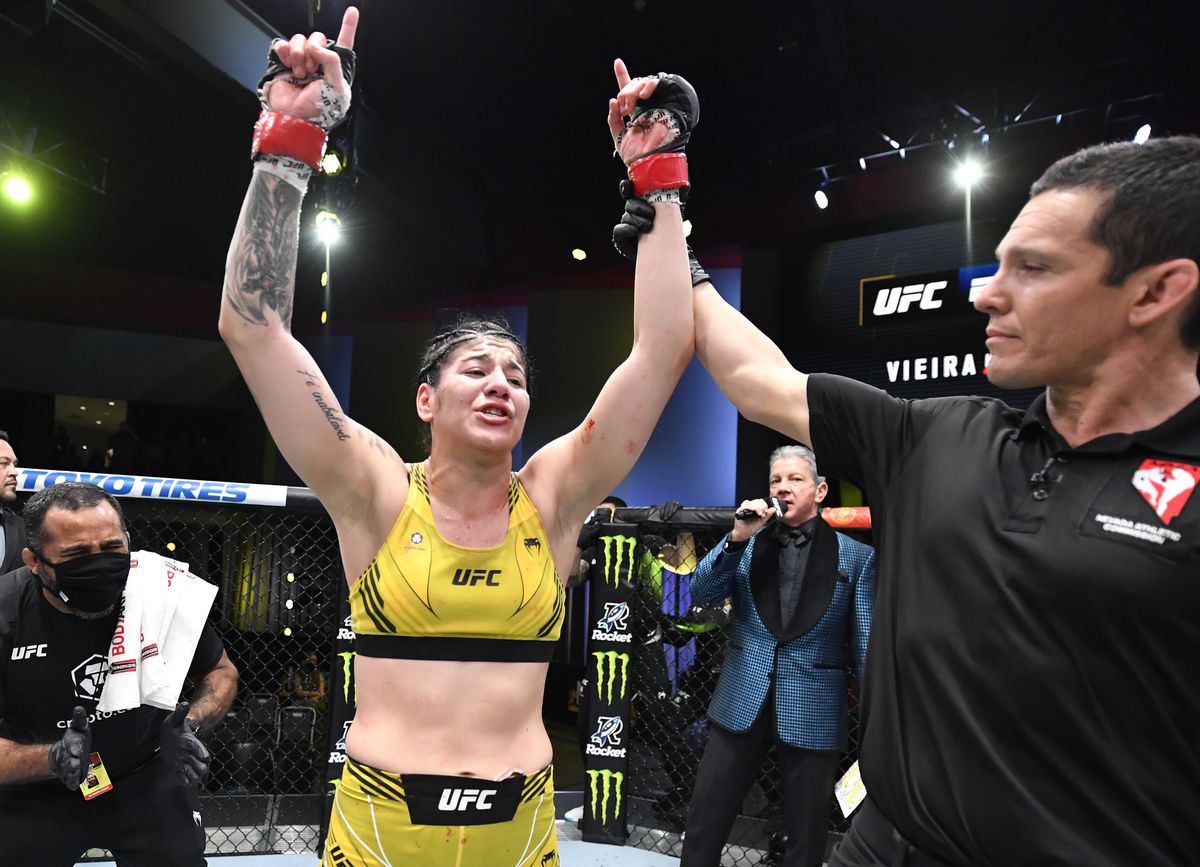 After six straight weeks of betting action, the UFC is finally set to take a small break before embarking on a 12-week run of events through the summer. But before they go, the world’s premiere MMA organization is offering one final Fight Night card at their home base of the UFC Apex: UFC Vegas 55. In the main event, former bantamweight champion Holly Holm takes on rising contender Ketlen Vieira in a bout with possible title implications. Plus, we’ve got 10 more competitively matched fights on the docket, with plenty of chances to make your fortune.

Holly Holm, in her prime, was an even better fighter than Ketlen Veira. But it is a stretch to say that Holm may still be in that prime. She’s 40 years old, hasn’t fought in 19 months, and is coming off a knee injury and a medical diagnosis (hydronephrosis) which I won’t pretend to understand but sounds bad. By contrast, Vieira is 30 years old and seems to be hitting her peak. It feels that this line is closer when you consider she’s the better grappler. Yes, Holm will mostly outbox her at range, but Vieira is going to try and make this ugly, and when she does so, I think that gives her a real chance.

Ponzinibbio opened as a -150 favorite, but that line has shifted dramatically over the past week and I’m not sure why. Pereira is on an excellent run, and Pereira looks huge, but Ponzinibbio doesn’t look small, and he has better technique than Pereira and also has more gas. It is questionable whether Ponzinibbio can withstand Pereira’s massive explosions. We’ve already seen Ponzinibbio be whipped by an athletic, welterweight. My belief is that won’t happen this time around though, and Ponzinibbio will get the job done.

Simply put, Njokuani has a big size advantage and is a much better striker than Dusko Todorovic, and that leads to one inevitable outcome. Todorovic, a BJJ blackbelt, loves to strike. His defense relies largely on his head movements, preferring to hold his hands close to his waist. It’s an awful idea, especially against someone with Njokuani’s speed, power and agility. I’m sure it will lead to him being punished.

This is likely dumb but it’s true. Hooper is a +155 underdog but this prop is at this number, despite Hooper’s grappling attacks being his most obvious path to victory. Colares has proven easy to take down but difficult to hold there, and Hooper is not a good wrestler, but he’s a tricky grappler and he finds his way into leg entanglements, even in fights he losing. It’s worth taking a look at this score to see if Hooper is able to catch a heel hook once more.

As mentioned above, this should be a good night for Njokuani. Although I love him, a play on him is fine by me. However, at this cost, it makes perfect sense to have him as a part of a parlay.

This is the fight I am the most confident of, and for a very simple reason: Jonathan Martinez excels at kicking legs and Vince Morales excels at having his leg kicked. Benito Lopez won the fight and Martinez’s partner, Chris Gutierrez also did so. There is no reason for me to believe that things will change here. Martinez must win by cutting his hair.

In their last five fights apiece, this over could have cashed in eight of them. Neither woman has won a fight by stoppage since 2017 and I’d be shocked if either of them broke that streak now.

Parlay these three bets together for +151 odds

I’ll be honest, this is my favorite bet of the week because either it’s going to be dead almost immediately (if Jailton Almeida can score a takedown early) or it’s going to be the most exciting 15 minutes of the weekend. Look, there’s a reason Almeida is the biggest favorite on the card, and he probably will win. This line of thinking is absurd. This line is absurd. Almeida, a natural light-heavyweight, is not going to be able to move above the maximum weight. Yes, he has the more chiseled physique, but Porter is going to have 30 pounds of weight on him — and he’s actually not a bad fighter! Porter can still wrestle and is a great fighter for his division.

If Almeida comes in trying to force a takedown, he could easily gas himself out and Porter can outpoint him down the stretch. I’ll also add that it’s insane that Porter is a +410 underdog, but this line is high as it is, given that Porter has not finished anyone since joining the UFC.

It was a difficult go for us last week. Before Aleksandar Rakic took our knee, we looked like we could make a profit. Alas, that’s the way the cookie crumbles sometimes. Our inability to make parlays proved to be a disaster. Parlays, as always, are not for fools. We persevere.