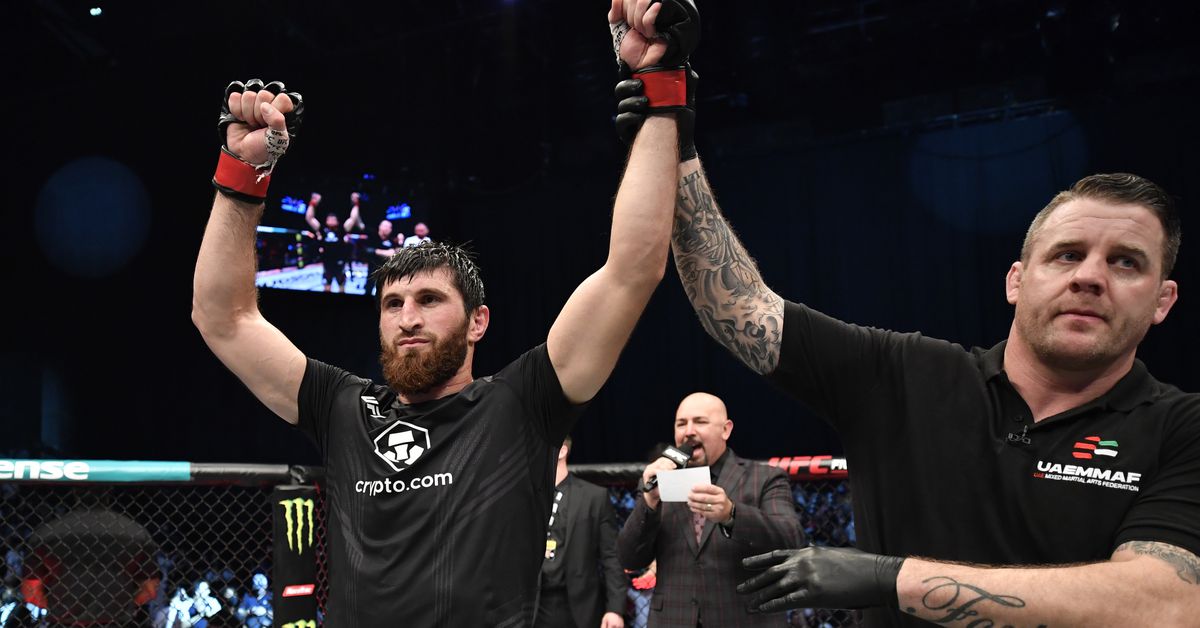 There’s plenty of time to get on the bandwagon of Magomed Ankalaev, the man who could be UFC light heavyweight champion before the year is through.

Ankalaev — No. 7 in MMA Fighting’s Global Rankings — has a stiff test ahead of him in Saturday’s UFC Vegas 50 main event as he takes on one-time title challenger Thiago Santos (9). Ankalaev could be stopped by one bad shot from Marreta, who is still one of the most fearful strikers in UFC. It wouldn’t be the first time that Ankalaev has faced the odd hurdle.

In his very first UFC fight, the heavily hyped Dagestani fighter was expected to decimate Paul Craig and for 14:59 he was as advertised; however, in the final second, Craig forced a tap with a miraculous triangle choke and Ankalaev saw his undefeated record go up in smoke. He rebounded with three straight wins then found himself embroiled in a bizarre two-fight feud with Ion Cutelaba that comprised his entire 2020 campaign and now, three years after his UFC debut, he’s finally right where many experts predicted he would be.

He goes for an eighth consecutive win against Santos and if he takes care of business, in all likelihood he will face the winner of Glover Teixeira vs. Jiri Prochazka, which goes down at UFC 274 in May.

The stakes for the co main event are also high, as Marlon Morais (bantamweight) is looking to avoid his fourth consecutive loss. “Magic” has to deal with 24-year-old blue chipper Song Yadong, a prospect that coach Urijah Faber has predicted will someday become UFC champion. This is either Moraes’ chance to right the ship against a strong competitor or the final nail in what has been an eventful UFC run.

When: Saturday, March 12. The eight-fight preliminary card begins on ESPN+ at 4 p.m. ET, followed by a six-fight main card on ESPN+ at 7 p.m. ET.

I’m in for Magomed Anakalaev.

He’s a natural talent and there’s not much that anyone can do to stop him. Either he’s destroying his opponents in a matter of rounds or displaying his ability to make convincing decisions. This is everything you would expect from a future champion.

Ideally, you also want to see how they fare against top-ranked competition. He’s already taken out one past title challenger in Volkan Oezdemir and the matchmakers have given him the next logical step in Thiago Santos. Santos, as strongly I support Ankalaev in this case, is not an easy night at work.

Marreta can take Ankalaev’s head off in a second if he’s not sharp and he’s also shown in recent years that he can excel with a steadier, more tactical approach. The question is which way he should go on Saturday. Is Santos going out on Saturday headhunting, risking gassing himself out? Or does he try to draw Ankalaev into an easier contest that might still favor the younger Ankalaev.

Ankalaev has the striking to hang with Marreta on the feet and the grappling to pull away once Santos starts to slow down. I see Santos putting on a competitive effort in the first two rounds before Ankalaev takes him down in the third, mounts him, and finishes with ground-and-pound.

Song Yadong is known for his ability to make the right decisions. Marlon Moraes must finish this fight. Don’t let his recent results fool you, Moraes is one of the best finishers in the bantamweight division. His performances have not been as memorable in recent years.

It won’t make it any easier for Song who is a tough opponent. He brings both a young chin and good defense to this contest. But, Moraes could still hurt Song and put him down with a submission. That might be the best case scenario for Moraes seeing as how he’s had a few bad fights where he’s run out of gas chasing knockouts. He has all the skills of a bantamweight champion.

Song has not established himself as a professional in the same manner. Song has been competitive, had good luck with the scorecards and a testament to his speed and punching power. His ideal route to victory is surviving Moraes’ early sprint and turning the fight into a marathon.

It’s still Moraes’ fight to lose in my eyes though. I’m going with a risky pick here and guessing that he becomes the first fighter to force a tap from Song.

The stage is set for a game of cat and mouse.

Sodiq Jusuff supports his heavy hand with an incredible jab, which he will have to use to catch Alex Caceres. Lateral movement and his ability to cut off the cage will also be essential for Yusuff to win this fight. If he doesn’t give Caceres a reason to slow down, “Bruce Leeroy” will pick him apart for three rounds.

This is the best version of Caceres we’ve seen and it feels like his 25 UFC appearances have built him into a sleeper contender at 145 pounds. At 33, he hasn’t lost much of a step and he still has an effective submission game to fall back on if the striking isn’t going his way.

Yusuff is the favourite for a reason. However, this fight is closer on paper than what the oddsmakers believe. Yusuff’s advantage in power will give him an edge on scorecards. I expect a close contest.

Which Khalil Rountree will we get on Saturday? Will it be the flighty Ultimate Fighter runner-up who lets his opponents dictate the action? Will it be the skilled striker who can take the fight to the next level?

As “The Prince of Positivity,” I’m obligated to assume that Rountree will be in top form and if that’s the case, he’s knocking Karl Roberson out. Roberson, while a skilled striker and more experienced on the feet than Rountree is, hasn’t displayed the same finishing instincts as Rountree. Roberson might try to make this a point fight, while Rountree will work to remove his block.

While it was impressive to watch Rountree knock Modestas Baukauskas to the ground in his last bout, Rountree will be focusing on pressure and boxing instead. Rountree packs more power in those fists and he should employ it judiciously.

Rountree can be patient and the finish is possible. However, he may need to spend the first five minutes trying to find Roberson’s rhythm. A knockout will be possible once he has figured out Roberson’s rhythm.

Remember what I said about being all in on Magomed Ankalaev? Well, that goes double for Terrance McKinney.

McKinney’s stock was sold and I’m now buying it up. It’s a great feeling to see him actually do the classic fighter claim of “I’ll fight anybody, anywhere, any time”! It’s a huge risk, but it could bring you a great reward. Drew Dober was a former lightweight champion.

McKinney is facing a difficult stretch with Dober, however, he still faces the most challenging test yet. If this stays a standup battle, Dober has the hand speed and experience to block McKinney’s fast track to the top of the division. McKinney’s wrestling is a crucial factor in this fight, if McKinney chooses to use it. Dober showed some weaknesses in his takedown defense.

None of McKinney’s past five opponents have made it past the halfway mark of Round 1 and I expect the same to happen here as he’ll come out swinging to take advantage of the chaos created by his short-notice booking. Dober will be submitted after an exciting, but brief firefight.

Alex Pereira, the would-be Israel Adesanya slayer, is ready to make a statement.

Appearing in just his sixth MMA contest, the former two-division Glory Kickboxing champion has the kind of striking that can have him rising up the rankings in a hurry. His feet are light and precise, and he can take you out using any one of his limbs. Everyone wants him to face Adesanya once again.

Although Bruno Silva’s UFC fights are slow, it is usually because his opponent wants to wrestle. Against Jordan Wright, another striker, it took less than 90 seconds for Silva to add to his highlight reel. He won’t have to worry about Pereira shooting for a double leg either.

Still, as potent as Silva is once he gets going, I doubt Pereira will give him much of a chance to start lobbing “Blindado” bombs. He’s the best striker Silva has faced since Alexander Shlemenko four years ago and Pereira is a level above Shlemenko if we’re strictly talking standup. Silva will want to make this one ugly, but I believe that’s just going to lead to a beautiful knockout for Pereira.