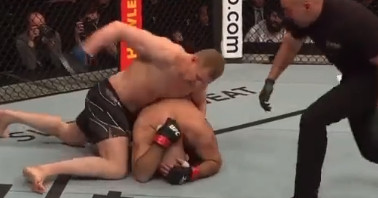 Sergei Pavlovich returned with a vengeance at UFC London, knocking out Shamil Abdurakhimov in the very first round.

Pavlovich had not fought since a first-round TKO of Maurice Green back in 2019, but the 29-year old Russian showed no signs of ring rust, finding a home for his right hand in the first frame and dropping Abdurakhimov before finishing him with follow-up shots on the ground.

Abdurakhimov protested the stoppage but ultimately, the win goes in the book for Pavlovich. The 29-year-old heavyweight is now 3-1 in the UFC and 15-1 overall, with 12 of those wins coming by way of first-round knockout. All three victories on his current winning streak were first-round knockouts.

Abdurakhimov lost his three previous bouts to Curtis Blaydes and Chris Daukaus. Pavlovich also suffered KO/TKO losses. A 40-year-old veteran, Abdurakhimov is 5-5 overall since signing with the UFC in 2015.