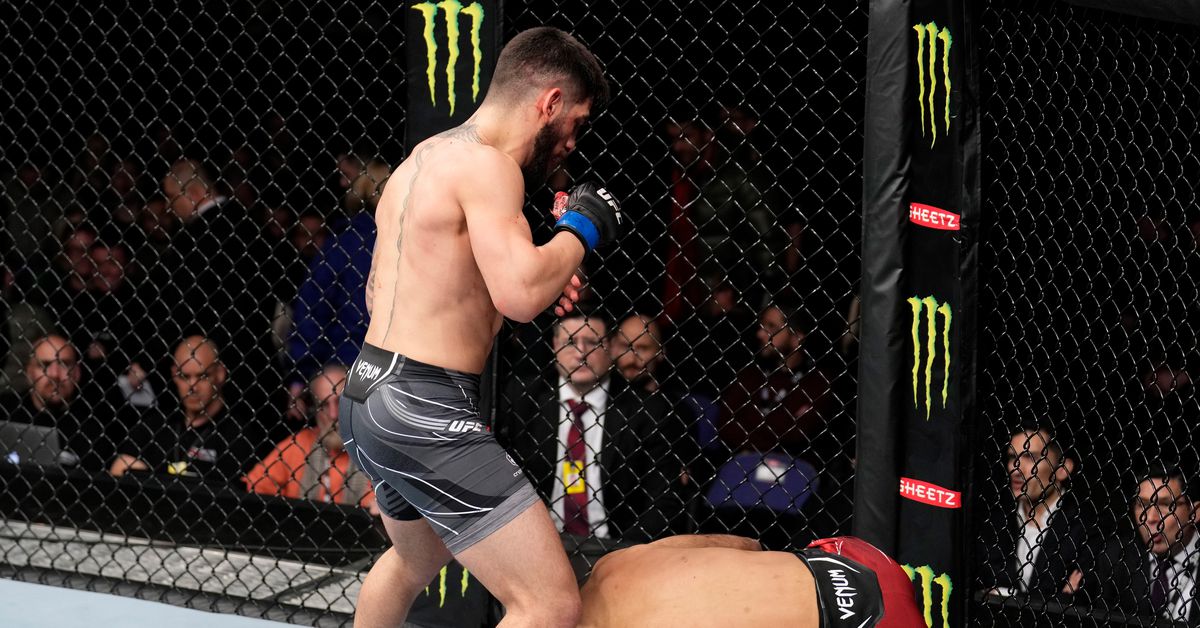 Ilia TOPURIA had to overcome a close finish in round one to deliver a brutal knockout to start the UFC London main card.

Topuria nearly lost his night with a head kick by Jai Herbert, but Topuria managed to recover and make it through the first round. Topuria then decided to unleash some violence of his own in Round 2, pushing Herbert back towards the cage and unleashing a massive right hook that clobbered the British lightweight and sent him crashing to the canvas.

Referee Marc Goddard rushed in to stop the fight, with the end coming at 1:07 in the second round.

” The game plan was straightforward: “Come in and take his heads off,” Topuria stated.

Prior to the finish, Herbert was the one headhunting and looking to give the veteran featherweight a rude welcome to the 155-pound division. Topuria was still trying to get his feet under him, but Herbert landed a big head kick early that hit flush and made it appear that there might be a final.

Despite being rattled, Topuria recovered well enough to close the distance and grab onto a takedown to help stunt Herbert’s momentum while recovering. Herbert eventually climbed back to his feet, where he started to unload on Topuria again as the Georgian fighter once again entered survival mode.

Topuria was bleeding and falling down one round. Topuria didn’t intend to allow Herbert to repeat the act in Round 2 when he charged out of his corner.

Topuria landed heavy punches on the inside. Then he hit the right hand, twisting Herbert before he fell to the ground. It was a massive one-punch knockout as Topuria made quite the impression in his lightweight debut.

Topuria won the fight and called his shot. He had been in an altercation pre-fight with Paddy Pimblett from England, who was also fighting at UFC London.