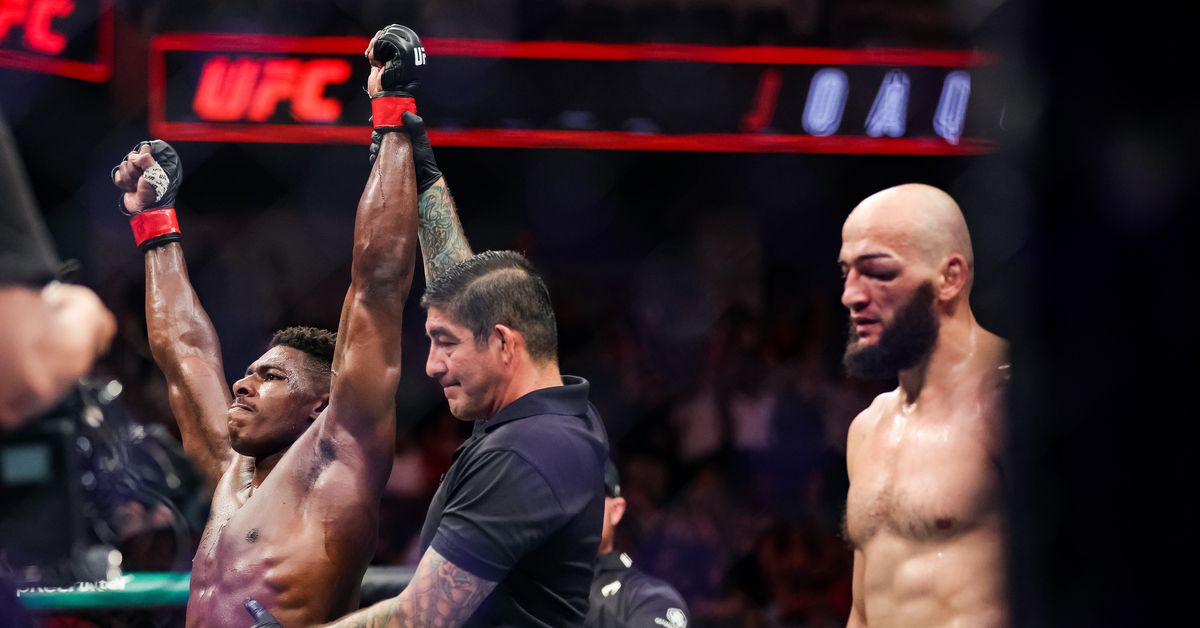 Joaquin Buckley gave one of the best fights of his career as he fought Albert Duraev round-after-round to win UFC Austin.

It was a striking masterpiece from Buckley who landed at will throughout the fight but it was a series of hard left hands that did the most damage with Duraev’s eye closing completely between rounds, which forced the doctor to call a stop to the contest. The third round ended 10 seconds after the official conclusion. Buckley won the TKO victory.

“This is war when we come out here in this cage,” Buckley said. “No animosity, I love that boy, he’s my brother. It’s just hard work and hard grind to get back to the blue collar .”

Aggressive from the jump, Buckley was coming after Duraev with everything in his arsenal and he blasted the Russian with a huge head kick early that had the crowd reacting rather loudly. Duraev survived and then delivered a head kick of his own that Buckley absorbed as the middleweight continued throwing bombs at each other.

Sticking to the basics paid off in the second round. Buckley landed a straight punch which wobbled Duraev briefly while simultaneously putting a large mouse underneath his right eye.

Buckley continued dishing out damage with a series of hard left hands that had Duraev hurt and desperate to get a takedown to avoid any more punishment. Duraev had severe swelling in his left eye that nearly shut him out from the side.

Duraev survived by dragging fight down to the ground but it was short lived success as Buckley just kept moving and scrambling until he got back to his feet. Just before the horn sounded, Buckley connected with another stinging left hand that sat Duraev down as he looked confounded at the repeated blows he just could not block.

The ringside physician came into the cage to look at Duraev as the third round was getting underway and it was obvious that his eye left him severely compromised. The fight was called off with Buckley earning the victory, which was his third win in a row overall while moving to 5-1 in his past six fights.