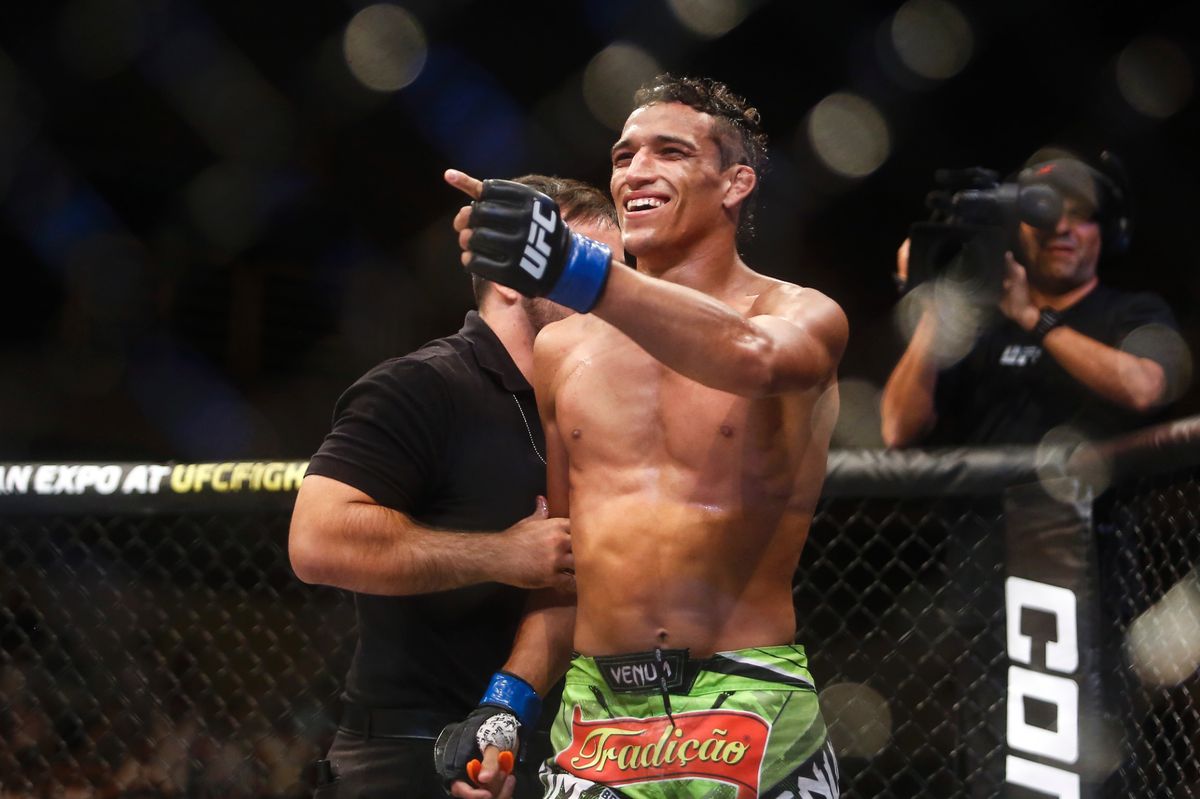 This weekend, UFC 274 takes place at Footprint Center in Phoenix and features two title fights and a host of other marquee matchups. But the biggest fight of the weekend is undoubtedly the main event, where lightweight champion Charles Oliveira looks to silence his doubters when he faces off against one-time interim champion Justin Gaethje. Let’s take a look at what each man needs to do to get the win, any X-factors that might be in play, and what we ultimately think will happen.

Paths to Victory for Oliveira at UFC 274

Charles Oliveira has had one of the most fascinating careers in UFC history. Only 32 years old, the lightweight champion has been competing in the organization since 2010, but he spent much of that time as a featherweight, where he struggled to find consistent success. Then in 2017, “Do Bronx” moved back up to the lightweight division, where he has gone on an absolute tear, amassing an 11-1 record and his current 10-fight winning streak.

Oliveira, during this revival, has become a highly skilled fighter who’s not only capable of all phases but also dangerous. Oliveira has been a skilled grappler, which was always a major advantage. However, Oliveira is now able to combine both of these skills in an offensive way, which can pose serious problems for anyone that he faces. He would be best to use his grappling and wrestling against Gaethje.

Gaethje, the most dangerous man ever to enter MMA is capable of turning on the lights with a single punch or making fights into grueling brawls that endanger opponents. It is best to place Gaethje on the butt of Oliveira, as he poses no threat to Oliveira’s health and has shown that he does have some serious weaknesses. Khabib Nurmagomedov took Gaethje down and made him look like an interim champion. Oliveira, while not the same kind of grappler as Khabib, should have plenty of success with that. Oliveira should engage in striking with Gaethje to make him fall. He also needs to look out for the bodylock takesdowns and trips that Oliveira has been so good with.

Paths to victory for Gaethje at UFC 274

Oliveira spent his time perfecting his game and becoming a deadly jack-of-all trades. Gaethje, however, has devoted all of his development points to sheer violence. We’re talking about a man who has won “Fight of the Year” three times in the last five years. That doesn’t happen by accident.

Gaethje made his name as the platonic ideal of an MMA brawler: he constantly came forward and threw everything, everywhere, all at once at his opponents, creating a series of increasingly destructive car crashes until one of them fell over. Gaethje was almost never the one who did. After losing the bloody battle against Dustin Poirier and Eddie Alvarez, Gaethje decided to take a step back. Gaethje still has the brawler of excellence, but he has also developed a more deadly kickboxing style. He uses pressure and leg kicks as opportunities to unleash his power shots and is the most powerful lightweight hitter.

If this fight were to be contested solely on the feet, Gaethje would win it in a walk. Gaethje is the stronger puncher and has more experience against Oliveira’s leg kicks. And the way to make sure this fight stays on the feet is for Gaethje to stick to his basic principles and pressure Oliveira without getting too wild. It is harder to takedown when you are on your back foot and even harder when your ribs get melted by body shots. Oliveira will be on the back foot if he invests in his legs and body early. This will make Oliveira’s takedowns harder as fight progresses and give Gaethje more chances to score a huge shot high to win the fight.

Part of what makes Oliveira’s sudden rise to a title so impressive is the dramatic change that we’ve seen from him during this run. Oliveira has long been known as one a man with predatory grappling using a variety of submissions, but not a guy with a great chin. He’s also known for his willingness to quit when it got difficult. Oliveira survived a barrage heavy punches in both of his fights against Dustin Poirier, Michael Chandler, and has now won two more.

It is difficult to build a reputation in MMA. But Oliveira seems to have beaten back that demon. Gaethje repeatedly stated that “once you quit, you’re always going to quit,” which is true in some ways. Gaethje, who is considered the most dangerous man in the sport of boxing, will be the main focus until the fight. Oliveira’s physical and mental strength to resist him will also remain a question.

This is the classic grappler vs. striker matchup. It was a close fight but I believe Gaethje will prevail. People have believed that Gaethje, due to his wrestling abilities, was Khabib’s most challenging test. It’s an interesting story and it didn’t work out for Khabib. Khabib was forced to take huge shots in order to bring Gaethje to his knees and was unable to succeed. Khabib is, obviously, a substantially better wrestler and a much more physically imposing grappler than Oliveira. Gaethje should be able to keep this fight mostly upright and while Oliveira isn’t a sitting duck there, eventually, he will be. Gaethje simply is too good at forcing the sorts of fights he wants, and Oliveira doesn’t have the timber to win a battle there.

Justin Gaethje by KO, Round 3.