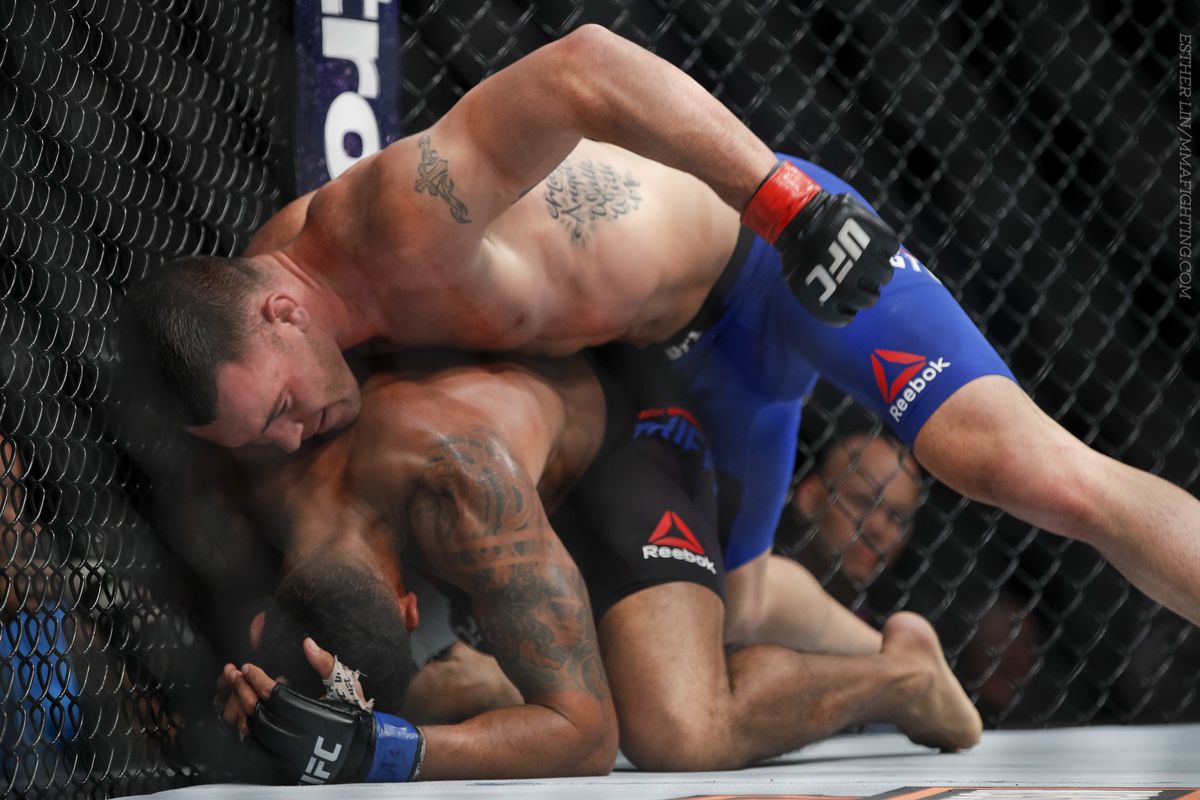 This weekend, UFC 272 takes place at the T-Mobile Arena in Las Vegas and features a welterweight grudge match between former interim champion Colby Covington and “BMF” champion Jorge Masvidal. The once “best friends” now turned bitter rivals are both coming off a loss to welterweight champion Kamaru Usman, and they desperately need a win to stay relevant in the 170-pound title conversation.

In anticipation of their long-awaited fight, let’s take a look at what each man needs to do to get that win, any X-factors that might be in play, and what we ultimately think will happen.

Paths to Victory for Covington at UFC 272

Covington must be his own person to win the fight.

Covington is arguably the premier pressure fighter currently competing in the UFC and virtually every single one of his victories has been because he can put forth an absurd work-rate for a welterweight. He throws nearly over 10 strikes per minute and attempts nearly 9 takedowns per fight, all while never taking a backward step. Michael Bisping likes to say that Covington “weaponizes his pace,” which is a dumb phrase, but it drives to the point at hand: keeping up with that level of activity is incredibly difficult for anyone, especially as the fight drags into later rounds. Masvidal may be able to match pace for the first 5 or 10 minutes, but for 15, 20, 25? It’s unlikely.

Furthermore, even the manner in which Covington pressures lines up well for him against Masvidal. While Masvidal has had success against other pressure fighters (Nate Diaz, for instance) and other wrestlers (Ben Askren), the one time he fought someone who married those two strategies together was when Kamaru Usman nullified him at UFC 251. Covington is able to do this here and can likely do it more efficiently because that’s his main focus. Covington excels at backing fighters up to the fence and then entering clinches, or safe shots to start a wrestling sequence (not diving his head in like Askren did). Masvidal is a good clinch wrestler, but he’s not as strong as Covington, and his tendency to get his back to the cage is a huge liability. Even if he’s defending the worst of it, Covington is still avoiding the danger, draining Masvidal’s energy, and winning the fight.

If Colby Covington comes to UFC 272 and fights like he did against Tyron Woodley, Robbie Lawler, and Rafael dos Anjos, he has a great chance to get his hand raised.

The Grudge Match Is Here!

Paths to victory for Masvidal at UFC 272

Unlike Covington, Masvidal cannot fight like he has become accustomed to and have any realistic hope of winning. Masvidal has something Covington does not have, however: The option to win the upset.

As noted above, Covington is a pace-monster, and his game is predicated on compounding round over round, like a snowball going downhill. The means Masvidal has two options available to him: either slow the snowballs descent and keep pace, or knock the snowball out. Let’s quickly go over the pros and cons of each.

Option A: Slow Covington down and keep pace

Masvidal, an outstanding defensive fighter, is as wily and skilled as you can get in this sport. Also, he’s a seasoned cardio expert. Covington is a fast-paced wrestler, but the last straw for Covington’s “Chaos” is Masvidal. If Masvidal can completely shut down Covington’s wrestling and avoid prolonged clinch fights, then he stands a good chance to beat him.

Masvidal should take advantage of Covington’s edge by using a stiff, direct jab. This is a tool Usman used to great effect. He also needs to use a hammer to the body to reduce Covington’s advantage in later rounds. Getting taken down in the center of the cage isn’t the worst thing either, as Covington leaves a lot of scramble opportunities when he’s on top. Masvidal must keep his back from the fence, but that’s not all. Covington loves takedowns from there, and he can drain a round away with mat returns and clinch control. If Masvidal can use footwork and a jab to keep things in the center, his technical superiority and power edge can shine through.

Masvidal has risen to prominence on the back of his newly discovered power punching, and certainly the simplest, though perhaps riskier, proposition is to go all out on that. Although Covington does not shoot the telegraphed takedowns that Ben Askren could time to give Masvidal a quick finish but he is still not an excellent defensive fighter and will come in aggressively against Masvidal. Conceding the fact that failure means getting taken down and repeated failure means certain defeat, the best calculus here may still be for Masvidal to simply sit down and swing really hard, and look to scramble up as soon as possible, otherwise known as the game plan he attempted against Usman in their first fight.

While Option A presents a viable path to victory for Masvidal, it is potentially the more difficult choice to pull off, requiring Masvidal to fight extremely well (and maybe even get a little lucky) for 25 minutes. Alternatively, Option B is a bit of an “all in” bet, and one with considerable risk as well. Masvidal might have trouble turning Covington’s lights off if Robbie Lawler could. If I’m Masvidal, I would try Option A to start and then reassess after the first round, because if you can’t keep your back off the fence, you need to go for broke as early and often as possible.

Given the fight’s “bad blood”, it is not clear how the two fighters will get to the cage. Will they both throw caution to the wind and just try to brawl? Stranger things have happened, especially with the sheer amount of trash that has been talked. Masvidal is heavily favored if that’s the case. We haven’t seen Covington wrestle in any other fights. Usman fought him twice in those bouts and he came out much worse. If Covington gets real dumb, he could find himself “baptized” after all.

I think that this fight is closer than what the odds have. It’s Covington who will lose in the end. Masvidal needs to either land a perfect shot or fight a perfect fight, whereas Covington simply has to be himself.