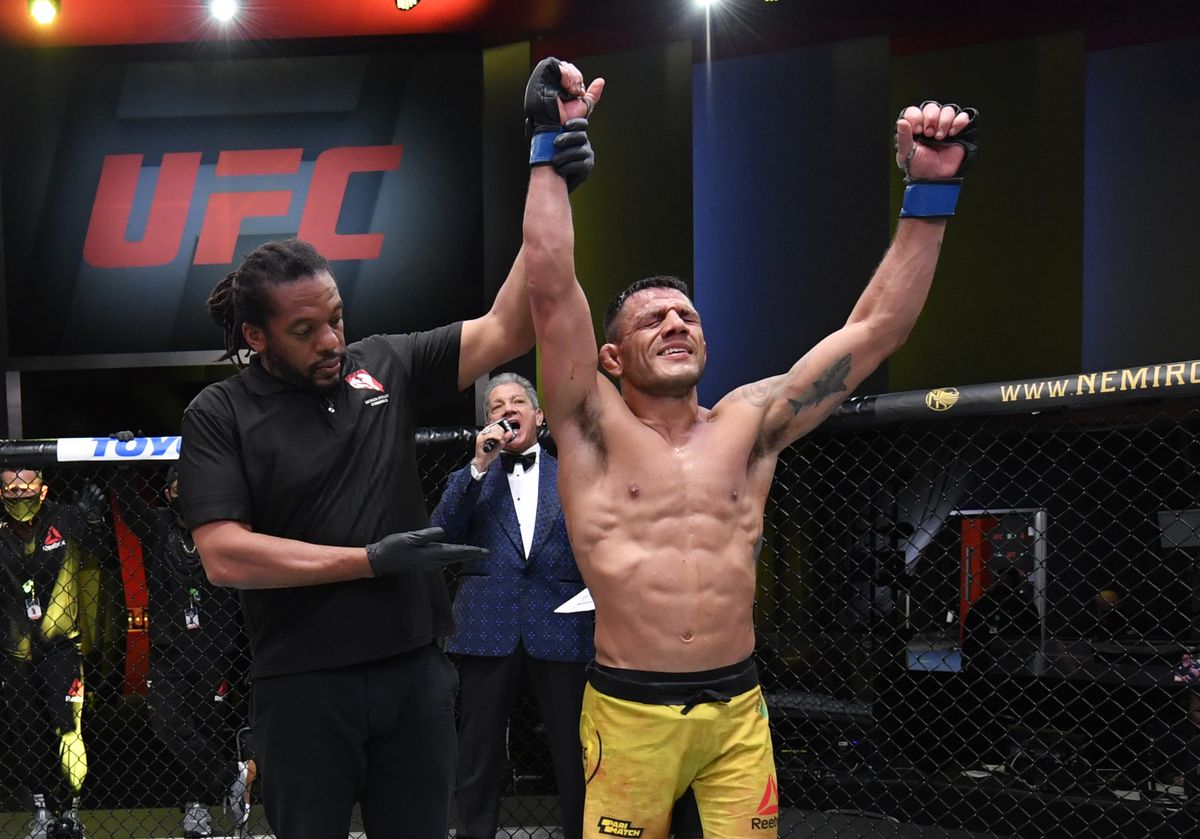 UFC 272 takes place this Saturday at the T-Mobile Arena in Las Vegas and it’s headlined by the long-awaited grudge match between Colby Covington and Jorge Masvidal. The former “best friends” are finally going to square up inside the cage and settle their business, but before that we’ve got 12 other fights, including a number of extremely fun matchups.

Let’s take a look at some of the best bets available on the card. All odds are courtesy of our friends at DraftKings Sportsbook.

Dos Anjos was originally scheduled to face Rafael Fiziev, but when Fiziev contracted COVID-19, Moicano answered the short-notice call, flying in from Brazil to take his crack at a top-10 lightweight. That change probably benefits dos Anjos, who goes from facing an elite striker to facing a jack-of-all-trades style of fighter, which is well-suited for dos Anjos’ style.

The former lightweight champion butters his bread with his trademark style of pressure fighting, crowding opponents back to the fence and hammering them with body kicks and hooks; he also shoots in on the hips and plays a smothering top-game. That should prove highly effective against Moicano, who is a rangy striker but easily gets put on the back foot, not to mention being somewhat slow of foot. On the floor, Moicano is probably the more dangerous submission threat, but dos Anjos is a more than capable grappler, and I struggle to see Moicano locking up anything from his back. Dos Anjos probably wins a decision, but given his propensity to attack the body, I could see a stoppage as well. Either way, dos Anjos should get his hand raised.

Barboza’s fight is a test of whoever takes on Barboza, whether they are able to pressure him while keeping his back straight. At range, Barboza is a both a monster kickboxer and a great defensive wrestler, but once he gets moving backward, it all sort of falls apart. Mitchell should be able to do just that. Mitchell is a very skilled wrestler, and a dangerous submission grappler. If Barboza attempts to make a standing up, Mitchell will be a serious threat. Mitchell, Barboza are on the decline of their careers, so Mitchell should be the winner.

Both of these guys are good prospects for the lightweight division, but this seems like a good matchup for Turner. He’s longer than Mullarkey and packs more power in his punches. Mullarkey is perhaps a touch quicker, but he tends to run himself onto shots, that’s a bad idea against Turner. If Mullarkey leans on his wrestling, he can make this one closer, but Turner is improving rapidly and he’s nasty in the clinch. I could see him catching Mullarkey and putting him away or simply outworking him for 15 minutes.

I am a bit surprised that Nzechukwu is the favorite here. Nzechukwu shows promise but has big flaws in his game. His most notable is that he’s defensive and he doesn’t use his length well. Despite being huge for the division (6-foot-5 with an 83-inch reach), Nzechukwu never uses his length, instead fighting from behind a high shell-guard. Although he can hit hard and is able to find openings behind his guard, he cannot escape the fact that Negumereanu has an uncanny chin. If Negumereanu simply walks forward and swings hammers, he’ll eat some return fire, but he will land some shots of his own, and Nzechukwu will retreat even further. Add in the wrestling pedigree of Negumereanu, and I favor him to pull off the upset.

I did a deeper dive on this fight earlier this week, so I won’t spend much time here. The short version is that this is a terrible style matchup for Masvidal, who simply won’t be able to keep pace with the wrestling and work rate of Covington. Masvidal, who is a great defensive fighter, should be able to make it to the last horn. But, this fight is Covington’s to lose.

This may not be the most popular bet, but it’s still my belief in Greg Hardy’s ability inside the cage. The fact is, Hardy is a better athlete than 99. 9% of the heavyweight division, and athleticism counts for a ton in MMA, especially in the higher weight classes. By all accounts, Spivac is a better fighter than Hardy, but he’s lost to the best athletes he’s faced, and I don’t like how he reacts to getting hit. Despite his flaws Hardy is a fast and powerful fighter. I’m backing the upset and given that you get an extra +125 for going KO instead of a straight bet, I’m in for the prop here.

As I mentioned above, Covington is my favorite to win this match. However, he’s not an outstanding finisher, and Masvidal plays a great defensive role. This leg is expected to hit, barring an unexpected “baptism”.

In their 15 combined UFC fights, Rodriguez and Yan have gone to decision a whopping 13 times, and that includes a pair of five round fights. Both women can finish well and are durable. I’d feel comfortable with this line for a 5-round fight, so I feel great with it for only a 3-rounder.

In what is certain to be a strictly striking affair, Jacoby is the better kickboxer and the bigger man. Jacoby’s powerful calf kicks should be enough to stop some of Oleksiejczuk’s fast movements. His jab should remain tethered at the Polish fighter. Oleksiejczuk can still be hurt, and a stoppage may be possible. But a 3-round decision is just as likely.

Parlay these three bets together for +180 odds

This fight is very favorable for Covington, as noted previously. However, the former interim welterweight champion was hurt in both of his fights with Usman and could potentially be a little shopworn at 34. It’s likely that Masvidal will decide to end the long-running battle early, given that he knows that a lengthy fight is not in his best interest.

If you’re going to bet on a long shot, make it a fun one, and what could be more fun than cheering for Masvidal to pull off another Ben Askren-esque knee?

This past week was a tough one. Really got the main event wrong. Apparently, Islam Makhachev is better than I thought, and I thought he was the best lightweight in the world. There is plenty of action and we have a good chance to rebound.