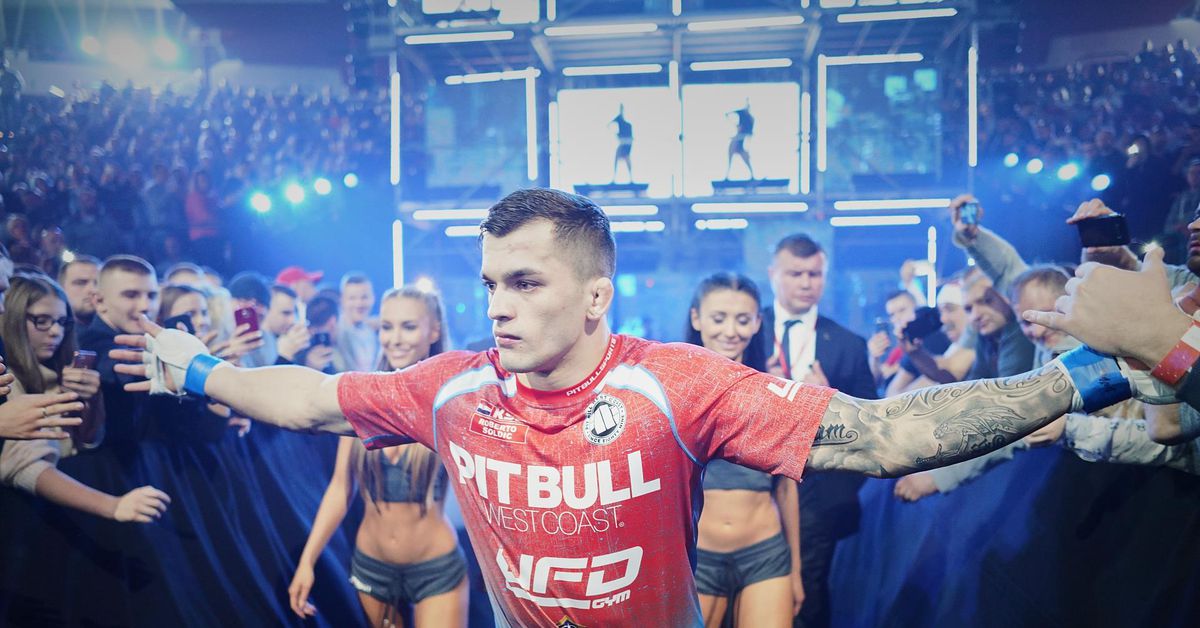 Roberto Soldic has a big decision to make very soon.

“Robocop” recently picked up his seventh straight win and second KSW title — the middleweight strap, to go along with his welterweight championship — with a brutal knockout win over promotional legend Mamed Khalidov at KSW 65 in December.

The two-division KSW champion could become one of the most interesting free agents in MMA later this year if he doesn’t re-sign with the promotion. According to Soldic, there will be much more clarity on his future following KSW 67, which takes place this Saturday in Warsaw, Poland.

“[I have] one fight left and it expires [in] July,” Soldic told MMA Fighting on We Got Next. “We will know after this KSW event next Saturday — Sunday, we will have a meeting with Mr. Lewandowski, the boss of KSW, and we will [let them know] what I want, and we will see if they accept this or not.

If the meeting between Martin Lewandowski and Soldic’s management team doesn’t go as well as it could, that means one of the more exciting and vicious fighters in the sport will have a lot of options.

Of course, hardcore fans of the sport in North America, along with the European MMA scene, would love to see the 27-year-old test himself with the top welterweight and middleweight fighters in the world.

“Man, the people, the fans, Instagram, Facebook, everyone, on the street, ‘Hey, when do you go to the UFC?’ Many, many times,” Soldic said. This is crazy. Each day I ask myself, “When will you go to the UFC?” It’s time you went to the UFC. It was always my goal to be there and see Georges St Pierre and other fighters I had seen on YouTube and television. And I had time to train with some of these guys, it was a really good feeling. It’s a motivation for me.

“KSW, they pay me really good. And now, I don’t know what to do. I’m a little bit confused, but we will see after Sunday what they want, what they offer, how much they give. Are they going to give [what we ask]?? The fans and media are asking me every day when I will be going to UFC. I believe in myself. I know what I can do, and soon we will know what the future brings.

When Soldic fights, it rarely makes it to the judges’ scorecards as he has finished 18 of his 20 pro bouts inside the distance — including a third-round TKO win over current UFC middleweight up-and-comer Dricus Du Plessis to capture the KSW welterweight title in October 2018.

Every promotion will seemingly want to add a competitor of his caliber and exciting style. Soldic answers the question, “What is the most important factor in this decision?” He says money. But he would lie if he said money was not a key component.

” UFC ranks No.1 in sportsmanship. 1,” Soldic explained. “KSW, they pay me really good money that I can just relax. It’s more than just UFC. PFL offered me a contract. Everyone wants to see you win the same way as I do with the knockouts. For me, everything is important. Money, for the sport, UFC is No. 1 for sure, but at the end of your career, they ask you how much money [you have].

“That is also the thing. What are you using to do this? When I am a UFC champ and have no money and go to a restaurant for dinner, it is impossible to pay with my belt. Today, it is all about money. However, I am motivated by the competition and want to train with the best.

” I also would like to get a third belt but don’t have the weight. But we will see after Sunday. I can’t wait to see their offer.”

With Soldic being 27 years of age and entering his athletic prime, it would be easy to say he still has time to have his cake and eat it too — re-sign with KSW, or sign with another promotion, then head to the UFC in a couple of years. But with 23 pro fights under his belt, Soldic isn’t so sure about that, especially with the uncertainty a sport like MMA can present.

MMA-lovers may be eager to witness Soldic in action inside the hallowed octagon.

” Some people believe that you are young. But I’m not sure. I feel like all of my experience, all of my travels, sparring with the fighters, I feel like the time is now,” Soldic said. “Sean Shelby also said to my manager, ‘Don’t bring him when he has too many injuries, when his body is finished from the training and everything.’ I know that is true, I broke my right hand — and now it’s good — but I don’t know what will happen at 30, 31 [years old].

“Now, I feel good, I feel ready, fresh, young, a lot of experience. I’m 20-3, I know how it feels to fight in the third round [and beyond], and I feel like I know how to use pressure, wrestling, jiu-jitsu, and the punches. I think the time is now, but still waiting for decision.”