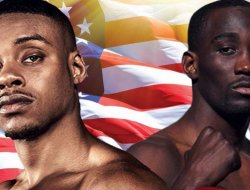 American coach Derrick James is practically the uncontested winner in the nomination of the best coach of 2022. He has won Errol Spence in unification with Yordenis Ugas, Jermell Charlo won the title of absolute world champion and a bright performance from Frank Martin in a cool prospect-clash with Michel Rivera.

Boxing fans and experts dream of seeing in 2023 a fight for the title of absolute welterweight champion between the Americans Spence (28-0, 22 KOs) and Terence Crawford (39-0, 30 KOs).

But James is not sure that this fight will ever take place. He blames Crawford, of course, but
does this is very neat and respectful: “I admit that this fight will never happen. You must understand one simple thing. There is Crawford’s point of view. There is how he evaluates his market value. And there is a market. So, these numbers are very different. This is where we have a problem.”

James believes that “this does not mean that Crawford absolutely needs to make concessions. But it would be nice if he understood what the boxing market is telling us. And he tells us one word. And that word is no.

In fact, everything is much simpler. Crawford held an interim title defense in December, knocked out Russian David Avanesyan, for which he received from the promoter BLK Prime 10 million USD.

Apparently, this is what the company promised Crawford and Spence 25 million USD for a head-to-head fight, but Errol’s adviser Al Haymon is categorically against this (RVS). He wants this fight to take place as part of his Premier Boxing Champions.

At the end of December, Terence Crawford revealed the plan for 2023. Not a word about Spence. Do you think Jaron Ennis Avenue is really stylistically similar to Crawford? His coach father named the best in the division.