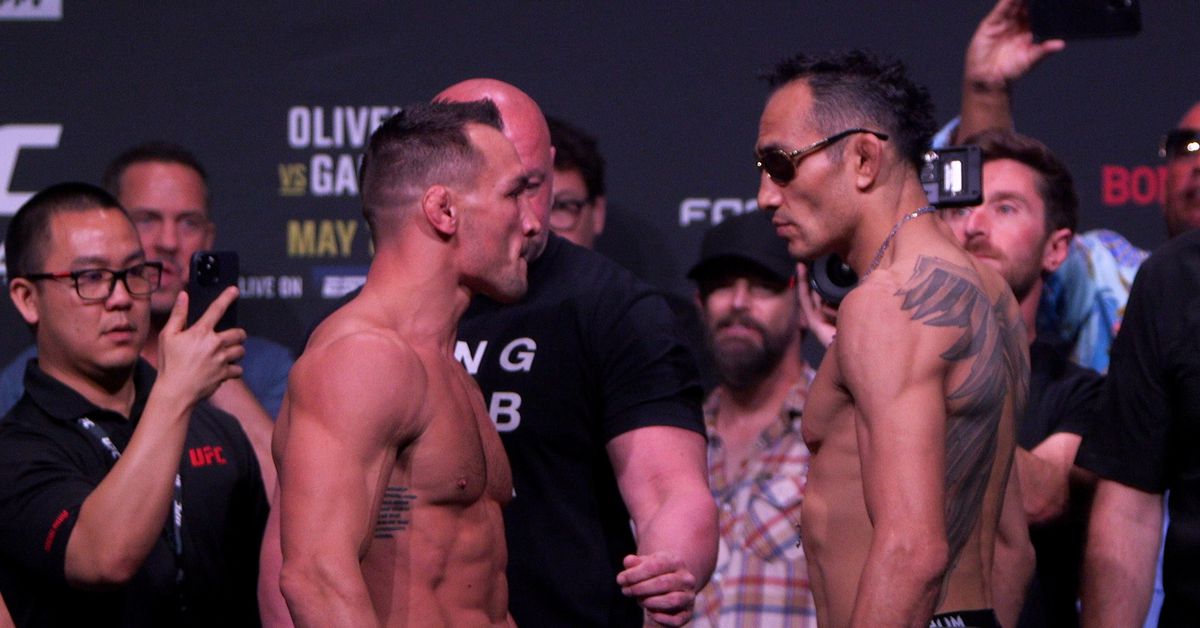 Tony Ferguson faked an ankle pick on Michael Chandler at the UFC 274 pre-fight press conference and it appeared he was about to make another move at the ceremonial weigh-ins on Friday except the former Bellator lightweight champion didn’t budge.

Although the lightweights had an intense fight, there wasn’t any serious animosity. However, Ferguson kept looking at Chandler even though Dana White, UFC president, had separated them.

Afterwards, Ferguson made a move towards Chandler, perhaps seeing if he could make his opponent flinch but he didn’t get a reaction as the lightweight left the stage without any further incident.

Meanwhile, the main event between Charles Oliveira and Justin Gaethje definitely featured a tense faceoff after a dramatic turn of events earlier on Friday changed the stakes in that fight.

Oliveira missed weight, which means he was stripped of the UFC lightweight title and will be unable to win the belt on Saturday night. Gaethje could still be champion with a win, but he must get past Oliveira first.

Oliveira, on the other hand, didn’t mince words and insisted that he would leave the cage as champion regardless of not having the belt.

“These things happen,” Oliveira said. “You can’t explain God. The champion has a name and it’s Charles Oliveira and I’m going to shock the world tomorrow.”

In the co-main event, Rose Namajunas will look for revenge when she faces off with Carla Esparza in a rematch after they first met to crown the inaugural UFC strawweight champion in The Ultimate Fighter season 20 finale.

Nearly eight years after her death, Namajunas is still trying to keep her title. Esparza is aiming to be a two-time champ.