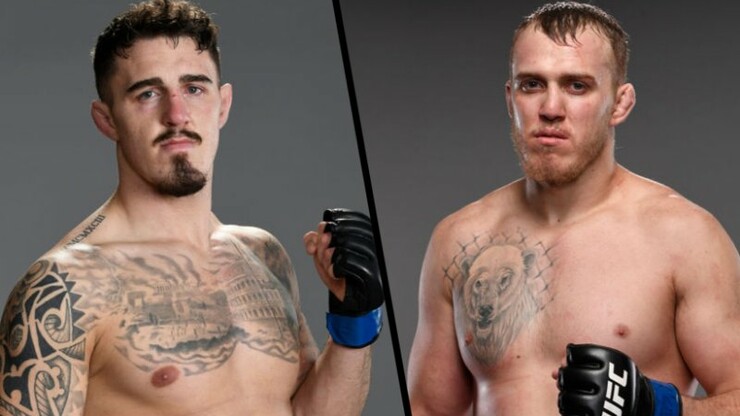 British No. 13 heavyweight Aspinall will face No. 14 Moldovan Spivak, who will replace Russian Sergey Pavlovich, who failed to get an American visa, on short notice.

Tom Aspinall (10–2) got into the top 15 thanks to his February victory over Andrey Orlovsky. Tom managed to strangle the former UFC heavyweight champion in the second round. Aspinall also won both of last year’s bouts, finishing with first round strikes from Jake Collier and Alan Bodo. The record for an Englishman in the UFC is thus 3–0.

Ex-champion of Ukrainian WWFC promotion in heavyweight Sergei Spivak (13-2) started his career in the UFC with two losses in three fights, but now the Polar Bear is on a series of three wins. Before defeating Alexey Oleinik by unanimous decision in June, Sergey knocked out Jared Vanderaa and not without problems passed Carlos Filipe in three rounds.

Aspinall and Spivak are strong on the ground, while they can be called universal fighters. On the ground, the Briton, being the owner of a black belt in BJJ, looks like a more dangerous submission master, and in the stance of Tom, his smashing blow makes him more dangerous than Spivak still cannot boast.

Considering that Spivak had too little time to prepare, Aspinall looks like a big favorite in this pair. We predict that the fight will take place in the standing position, and at some point Aspinall will shock Spivak and then either finish him on TKO ground or hold some kind of reception.

Prediction – Aspinall wins by TKO in the 2nd round

The fight will take place on September 5 in Las Vegas (Nevada, USA) at UFC Apex and will be the co-main at UFC Fight Night 191. The estimated start of the fight is 00:30 Kyiv time. The fight will be broadcast live on Setanta Sports.