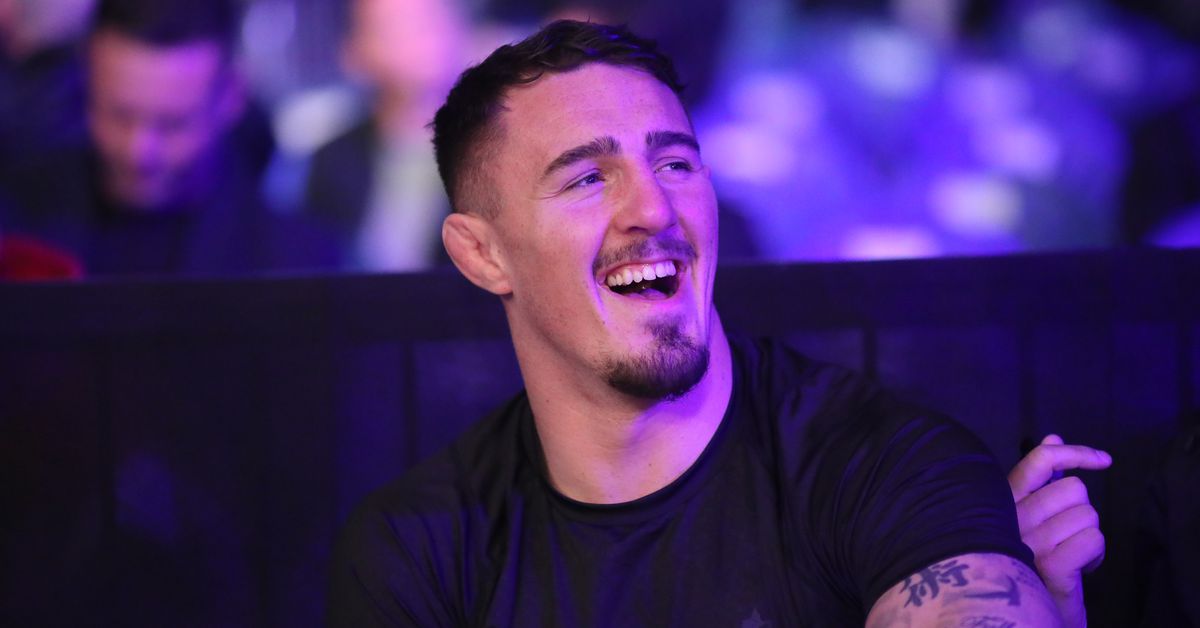 Tom Aspinall is planning to put on a show when the UFC returns to London this summer.

In March, Aspinall headlined the UFC’s first event in London in three years, and he did so in style, submitting Alexander Volkov in the first round, and sending the fans into a frenzy. The event was such a success that UFC President Dana White decided the company needed to run it back, and so now, Aspinall will headline the promotions return to the O2 Arena this summer, where he will be taking on divisional standout, Curtis Blaydes. Aspinall couldn’t be happier about this booking.

“If they’re coming back to the U.K., obviously I’m not going to miss that opportunity,” Aspinall told Ariel Helwani on The MMA Hour. It was a special night, and I would love to have another chance to experience it again. What’s the point? Why would I not want to be a part of something like that? I’m not going to pass that opportunity up, so we got it again. We’re going again. July 23, Aspinall vs. Blaydes, in the big smoke, in the O2 Arena, London, England, what more could you want?”

Blaydes, who is currently the No. 5-ranked heavyweight in the MMA Fighting Global Rankings, presents another step up in competition for the ascending Aspinall. Although he has had some struggles, Blaydes remains one of the most respected fighters in this division. He’s just coming off one his best performances, beating Chris Daukaus in March. Aspinall is confident that Blaydes’ threat to him will open new dimensions to his game. This means another crowd pleasing performance in July.

“Curtis Blaydes was for me the most difficult fight stylistically,” Aspinall stated. “But I’m okay with that because that pushes me to a whole new level. This pushes you to new heights, which is what I want. If I’m with someone that’s going to make me comfortable, I’m going to stay exactly where I am and do the exact same work that I’ve been doing. If you’re going to give me someone that I think is a scary fight and you’re going to give me fear, you don’t want to see me scared, because I end up doing stuff like I did in the O2 the time I fought. I end up doing some crazy stuff that I’ve never done before. So me with a massive fight with a really tough guy, that’s dangerous. That’s dangerous for any heavyweight.”

The fight will be interesting for heavyweights, and it is not just about the technicalities of the matchup. The UFC has been rumored to be looking for an interim title fight, with Stipe Miocic, two-time champion, and Jon Jones, two-time lightweight champion. However, nothing is known. Meanwhile, two of the division’s other top fighters, one-time interim champion Ciryl Gane and fan-favorite Tai Tuivasa are set to face off in September in a bout that could have title implications. So for Aspinall, while a win over Blaydes would be the biggest of his career, it still might not set him up for a title shot.

And, ever the patient man, Aspinall is perfectly alright with waiting.

“I don’t even care about it,” he stated. “I’m not. It was not something I expected to talk about after six UFC fights. It feels like there is more to be done. I’ve got a lot more work to do, more proving. I don’t want to be one of these people who gets here by talking. That is not me.”