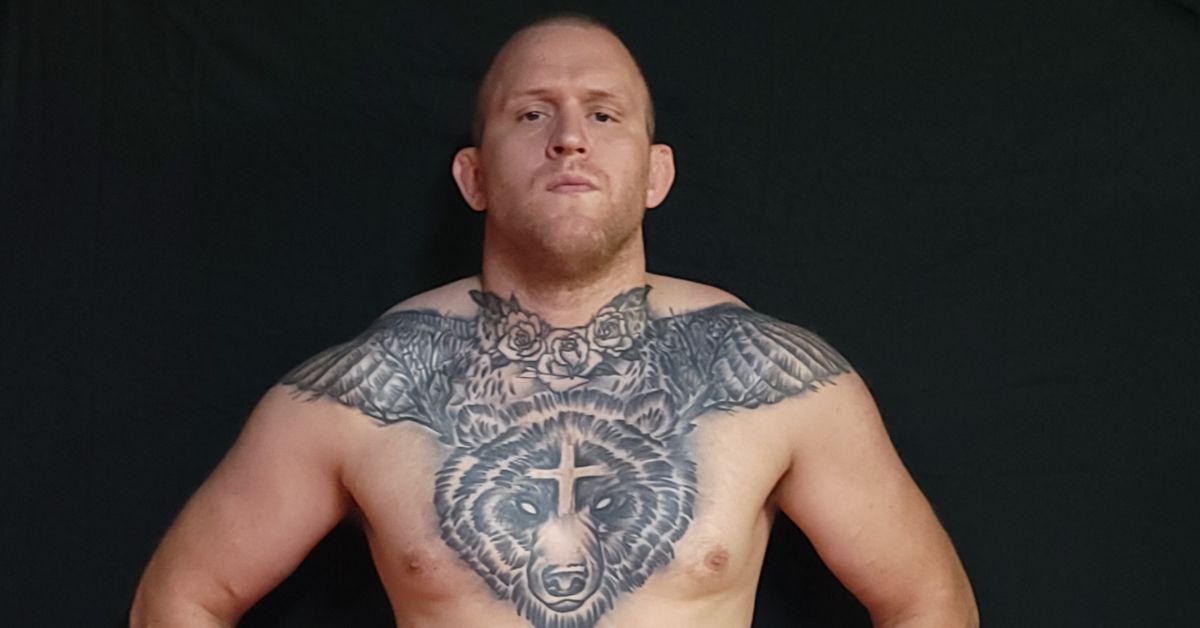 Content warning: This story contains graphic details about violence, mental trauma, and self-harm that may be difficult to read and emotionally upsetting.

With a gun to his head, Odie Delaney was ready to pull the trigger to finally stop the pain.

A few years before, the ex-All-American wrestler at The Citadel believed his life had been planned after getting married. He also found his calling as a police officer in Charleston, S.C .

But that changed in an instant on a quiet Wednesday night in June 2015 when a call came across the radio that there was an active shooter situation developing nearby. Delaney and his partner reacted immediately and tore down the streets with sirens blazing. They were the first officers on the scene at Mother Emanuel AME Church.

Just minutes prior, 21-year-old white supremacist Dylann Roof opened fire on the parishioners with a Glock-41 handgun after sitting through a bible study group at the historic Black church first founded in 1816.

When Delaney walked through the front door, his gun in hand, he was stepping into the unknown. But what he ultimately discovered was a tragedy that forever changed his life.

“He murdered nine people during a prayer meeting,” Delaney says. A Wednesday night meeting. He entered, was seated through it all, and stood up to kill everyone.

” I was there as a first responder. I helped get the survivors out of there. I saw a lot of people go to their deaths. This kind of trigger something in me .”

At the time Delaney followed all of his training.

Roof was already gone so Delaney ran through the church and made sure the shooter was out. Then, he began to tend to survivors and victims of the mass shooting.

It wasn’t until a few weeks later that Delaney truly understood the impact of that harrowing night, and the kind of trauma he personally endured by witnessing such a horrific event.

Delaney felt his chest tighten, his throat close, and was certain that he was in imminent death.

As it turns out, he was experiencing his first panic attack.

“It’s total dread,” Delaney recalls of experience. “It’s almost like drowning, and you’ll do anything to make it stop.”

The severe panic attacks continued to plague Delaney to the point where he could no longer effectively do his job as a police officer. When the department offered him help, the 6-foot-4 former college wrestler felt as if he could just handle everything on his own.

“It’s almost like drowning, and you’ll do anything to make it stop.”

” I don’t know what you would call it, but this doesn’t have to hurt me,” Delaney said. “I went through this, ‘I’m a man, I’m tough, I’m not going to let this affect me,’ but that’s not really how it works.

” It’s almost as if you have a physical injury. You can’t just wish it away. If you’re injured, you’re injured. This was my first reaction and it cost me .”

The tragic shooting at the church left Delaney with a fragile condition, later identified as post-traumatic stress disorder (or PTSD).

It also rattled him in other profound ways.

“”Growing up Christian has challenged my faith a lot,” Delaney said. “Watching a bunch of Christian people get killed like that. But it also kind of showed me where hate leads to.

“I developed a panic attack disorder from that, some suicidal thoughts. After that, I experienced a very dark and difficult time. Every week .”

Despite his obvious difficulties, Delaney still struggled to seek out actual help. He thought he could push through, and eventually, with enough medication, he’d come out on the other side.

But his problems got worse over time. He began thinking about all those people in the world who had it far worse than him, such as soldiers returning from war, which is one of the scenarios most commonly associated with PTSD.

” One thing that prevented me from speaking up was my thoughts about the soldiers fighting in Afghanistan. They are seeing deaths all of the time. Delaney states that I should be okay. “People who responded to 9/11, they seem to be doing OK, I should be doing OK.

“This is a dangerous game that you should not start. When you’re feeling these things, the depression, the self-harm, the hopelessness, it’s really important not to look out at other people’s experiences. Recognize what you’re feeling.”

Delaney resigned from the Charleston Police Department and began to take other positions away. He eventually returned home to Alaska, where he sought a new start.

By that time, a lot of time had passed from the tragic events at Mother Emanuel AME Church and Delaney was confident that he had overcome the most difficult times. Delaney’s experience as a policeman led him to choose an alternative career, joining the Alaska State Troopers.

Surrounded by a new location yet familiar scenery, he was ready to put his trauma behind him. But as a famous film once said, we may be through with the past, but the past isn’t through with us.

” I really believed that it was over,” Delaney said. “I was on heavy medication that kind of made it so I didn’t have the panic attacks, and I got a little cocky. I thought this was over — I can move on, no problem. I went and applied for the trooper academy in Alaska. I went through all the training without any problems.

“[It was] one of the last weeks of the trooper academy and we have an active shooting class, and I went to the class. It was a good experience, and I didn’t feel bad about it. But I did have a feeling of sadness inside. I had to leave the classroom.”

Delaney returned home the next night. When he woke up, he truly thought his life was ending.

” The next day, I experienced the worst panic attack in my entire life,” Delaney explains. It feels as if you are dying. You feel your throat close. You can feel your heart coming through your chest. I went to the emergency room. The doctors said that everything was fine. They said, “You’re in a panic attack .'”

With the anxiety attacks taking over, Delaney realized that his chances of getting a job in law enforcement were gone.

” I was sat down by a few senior officers,” Delaney recalls. “They said that if you go into law enforcement and these issues are not being addressed, it could pose a risk to your life as well as others.” And they agreed .”

His downward spiral continued from there. It eventually led to Delaney contemplating what his future might look like if he suffered from panic attacks that left him with crippling anxiety. What would that do to him? What would the impact be on his family?

That was when Delaney realized, at the very least, that it would be better for him to die.

“I had a gun to my head,” Delaney says. “That’s when you have to ask yourself, it’s either death or I’ve got to be brave one more time and tell somebody I’m having trouble, I’m at the end. It’s worthwhile to try to speak up .”

The suicidal thoughts didn’t necessarily subside, but Delaney finally began to realize that medicating himself was only numbing the pain, and that he never actually reckoned with the trauma he endured in the aftermath of the Charleston church shooting.

“I had a gun to my head at one point. That’s when you have to ask yourself, it’s either death or I’ve got to be brave one more time and tell somebody I’m having trouble.”

“I took a long time by myself to meditate and pray,” Delaney says. “I was just thinking to myself, what am I going to do? My baby was born. I had a wife and a child to take care of, and it was like, ‘What can I do?'”

Delaney’s answer was to enter into therapy and finally address the depression, anxiety, and suicidal thoughts that had been haunting him ever since that fateful night in 2015.

After years of denial, he was able to face the reality of his own trauma, which in turn allowed him to learn coping mechanisms, as well as realize that he wasn’t alone in the world. He could count on others, even though he was counting on himself.

It wasn’t easy but Delaney persevered day after day until the weight began to ease from his chest.

While the battle with mental health is really a never-ending war, Delaney started to see hope where despair once existed — and then he discovered a whole new calling.

” I found that when I was physically working out in Brazilian jiu jitsu and wrestling, it almost made me feel too exhausted to experience panic attacks or anxiety. While I was figuring out the mental side , training consistently every day helped me.

Because he had been a wrestler almost all his life, Delaney began to ponder whether MMA would be a great place to put his focus. It could also give Delaney a chance to use his experience and help other people in need.

The stigma surrounding mental health kept him from getting help when he needed it most. Delaney knew there were probably hundreds, if not thousands, more people who were facing the very same obstacles.

“It’s like you’re not allowed to talk about that. Delaney states that it’s weak. “It’s weak if you say, ‘I’m struggling and I’m thinking about harming myself or somebody else.’ We suppress it and suppress it, and then you get these catastrophic events were people are hurting themselves. It’s horrible.

“I really want to meet that problem head on. For some reason, soldiers and young men pay attention to MMA fighters, especially in the U.S. There aren’t many role models that I can look up to. That’s what I want to do. My idea was to create a platform using martial arts so that I can reach out and assist people. Help those who are experiencing the same thing I’m going through .”

Delaney turned pro in 2019 and quickly picked up back-to-back victories to start his career.

He relocated to Mississippi, where he began training out of an American Top Team affiliate school alongside UFC veteran and current BKFC fighter Alan Belcher. Delaney also started making regular trips down to Coconut Creek, Fla., to work with the main ATT academy while training under coaches like Steve Mocco, Muhammed Lawal, and Mike Brown.

His aspirations to bring his message to an even wider audience received a boost several months ago when Delaney got a call join the roster at ONE Championship.

He’ll make his promotional debut this Friday in a fight against Thomas Narmo, but the magnitude of the moment pales in comparison to the overall impact he hopes to make now that he’s dedicated to becoming a serious advocate for mental health.

” “Of course, there are selfish motives,” Delaney states. I want to provide for my family. My family is my priority. I want to win titles. My grandkids will remember me as a bad guy back then. But there’s more to it

While he is aware that he cannot reach all people, Delaney believes his message will get across on a larger scale. He can’t say for certain if people will be listening, but if his story can manage to save even one person, the 32-year-old heavyweight will be ecstatic.

“If I could even get one soldier to not pull that trigger when he’s got the gun to his head, my whole career would be worth it,” Delaney says.

” If I could get just one person, one child in school bullied, to continue their education, then this entire career would have been worth it. And ultimately that’s really what I care about.”

Checkpoint provides resources and support for mental health awareness around the world. Below are resources for Americans.