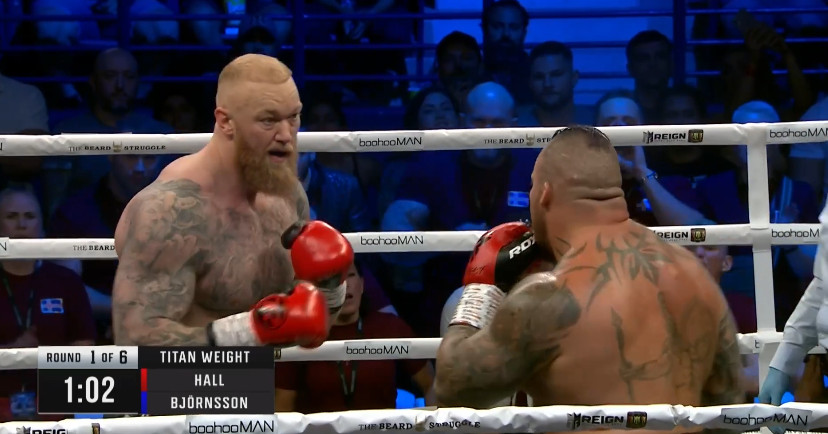 Thor Bjornsson and Eddie Hall feuded for years over the title of World’s Strongest Man, but there’s no question who is the better boxer.

Billed as “the heaviest boxing match in history,” Bjornsson and Hall squared off in a six-round amateur bout on Saturday in Abu Dhabi, and when the dust settled, it was Bjornsson who left the ring with a unanimous decision victory (57-54, 57-54, 57-54). Bjornsson was presented with the “Titan Championship .”

The full fight is available for free replay on Segi TV.

It was the fourth amateur boxing appearance for Bjornsson, known worldwide for his role as “The Mountain” in Game of Thrones. He remained undefeated at 2-0-2.

Afterwards, Bjornsson — a winner of multiple Strongman competitions who lost in the 2017 World’s Strongest Man finals to Hall — was asked if their longstanding beef was settled.

“Regarding my account, he appeared a little angry,” Bjornsson stated. He lost the fight so there are many emotions going on. I’ve been there. But right now I’m happy. If he wishes to rematch in the ring it’s fine

Bjornsson, 33, could not say what was next for him, but he sounded excited at the prospect of continuing to fight and train.

Through six three-minute rounds, Bjornsson scored three total knockdowns, including one in Round 3 off of a hard left hook, and one in the final round off of a 1-1-2 combination. Hall was also credited with a knockdown in Round 2 when he landed a power shot that sent Bjornsson back into the ropes, which he leaned on before recovering.

As the fight progressed, Bjornsson made good use of his height and reach advantage to pick Hall apart with his jab. To the surprise of the commentators, the bout was mostly technical, and while Hall did show signs of fatigue, Bjornsson looked mostly composed until the final bell.

This was Bjornsson’s return to the ring after an exhibition bout this past September, when he fought Devon Larratt, who was a replacement for Hall.