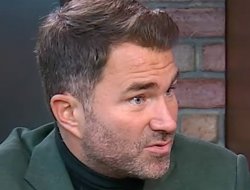 The winner of the upcoming fight between the unified WBC / WBO / IBF light heavyweight champion (up to 79.4 kg) Artur Beterbiev (18-0, 18 KOs) and WBO mandatory challenger Anthony Yard (23-2, 22 KOs) the next fight will have to be against British Callum Smith (29-1, 21 KOs), who is a contender from the WBC.

This was told by Smith’s promoter, Eddie Hearn.

“Callum Smith should fight the winner of this fight,” Hearn said in an interview.
iFL TV. His next fight in March will be announced soon. He received first priority to face the winner of the WBC Beterbiev Yard fight.”

Recall that Smith is the winner of the first season of the Super Series and the former world champion in the super middleweight division. Since moving up to light heavyweight in 2021, he has won two victories, including a knockout (KO 4) elimination bout against Mathieu Boderlik last August.

The Beterbiev Yard fight will take place on January 28 in London (England). Earlier, Smith himself named the favorite of this confrontation.

Artur Beterbiev – Anthony Yarde: forecast and bets for the fight on January 28