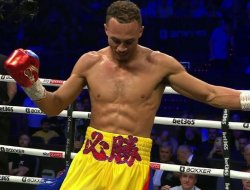 The evening of boxing on August 20 in Saudi Arabia, the main event of which will be the rematch of the Ukrainian WBA / WBO / IBF world heavyweight champion Oleksandr Usyk and the British ex-champion Anthony Joshua (24-2, 22 KOs), has replenished with one more fight .

Today it was announced that 25-year-old British light heavyweight (up to 79.4 kg), silver medalist of the Tokyo 2020 Olympic Games Ben Whittaker (1-0, 1 KOs) will box on the undercard.

The opponent of the prospect will be an unbeaten Croat
Petar Nosic (6-0, 3 KOs).

Note that Whittaker’s debut as a professional took place on July 30 at home – he knocked out in the 2nd round of an unassuming compatriot Greg O’Neill.

As part of the 2020 Olympic boxing tournament, Ben competed in the weight category up to 81 kg and on the way to the final he won four points, including two by a separate decision of the judges. His opponent in the final was the Cuban Arlen Lopez, as a result of which the opinions of the judges were also divided, but this time not in favor of the Briton.

At the end of July, the undercard fights of the Usyk-Joshua 2 show were announced.