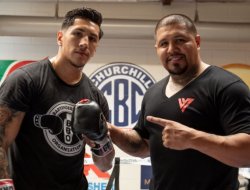 Left-hander Vargas controlled the distance with a jab, constantly disturbing the opponent with a left straight, but his right counterhooks were much more dangerous. In response, small Martinez tried to change stances, but after picking up blows, he returned to work as a right-hander.

In the 2nd round, Fernando did drop the opponent with a right hook, and when Martinez got to his feet, he immediately knocked him down again – this time with an uppercut. The referee immediately stopped the fight.

In the featherweight limit (up to 57.2 kg), Amado passed the native of Mexico not without problems
Osmar Hernandez (1-2, 0 KOs).

Vargas dropped his opponent in the opening round, demonstrated attacking aggressive boxing, but the defense needs to be tightened up. The score of the judges: 39-35 and twice 38-34.