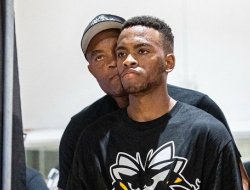 As part of the show, held on December 17 in Brazil, Kalil boxed against the same debutant and compatriot Paulo Roberto dos Santos and knocked him out in the final 3-minute of the 4-round fight with a sweeping right to the head.

Note that Anderson seconded his son in the corner, and after the victory, both knelt in the center of the ring – this is how Silva Sr. always paid tribute to his opponents during his performances in the UFC.

It is noteworthy that Kalil also performs in professional kickboxing, where his record is currently 2-1.

The 47-year-old Anderson himself has also recently focused on profiboxing, having scored a landmark victory over former world champion Julio Cesar Chavez Jr. last year, and lost out on points to boxing influencer Jake Paul this year.

See how 46-year-old Anderson Silva gives a light to his sons in sparring: video.