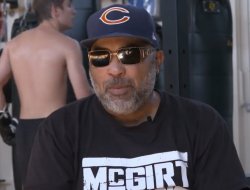 In a conversation with a journalist, McGirt commented on the rematch scheduled for August 20 in Jeddah (Saudi Arabia) between the unified heavyweight champion Ukrainian Oleksandr Usyk (19-0, 13 KOs) and the former holder of 3 titles Briton Anthony Joshua (24-2, 22 KOs).

Don’t miss anything: Usyk-Joshua Fight Week 2: all the news about the megafight on August 20

– The main fight of the boxing evening in Jeddah – Usyk – Joshua 2. How will it go?

– What do you expect to see? People are talking about a different version of Joshua, a more aggressive version.

– I expect to see the 13th round [смеётся]. As the first fight ended, so let it continue, but just see if Joshua can improve.

– You said “13th round”, this is an interesting point of view. I’ve heard some people cite the first fight between Wilder and Fury as an example. Fury was knocked down and then got up and boxed really well until the end of the fight and used that as an example for the second fight. Does Usyk use what he did in the 12th round with Joshua as an example to continue their fight?

You can’t fix what isn’t broken. Need to add a little. I think it will be an interesting fight. This fight will be better than their first fight.

What do you think of Joshua’s new coach Robert Garcia?

In your experience, what will Robert get out of Joshua?

— Pitbull. Pull the pit bull out of him because he’s good at it. Do you understand what I’m talking about. And send him to war. Therefore, it will be interesting.