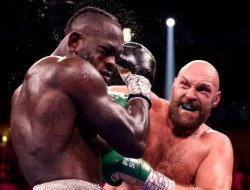 World Boxing Council President Mauricio Suleiman believes that WBC world heavyweight champion Tyson Fury (32-0-1, 23 KOs) will be forced to enter the ring against American ex-champion Deontay Wilder (43-2-1, 42 KOs) ) for the fourth time. Their first meeting ended in a draw, in the second and third the Briton won ahead of schedule.

As writes
WBN, Wilder vs. Andy Ruiz is expected to be announced as the mandatory challenger for the WBC title in November or December. Therefore, the meeting can occur from February to April.

Suleiman believes that if Wilder meets Andy, then the Bronze Bomber will win and get to the champion.

The president of the company raves and mutters about his latest 1st round knockout victory over Robert Helenius: “The power of the Alabama fighter has not diminished in the slightest. And this despite the fact that he lost a lot of weight. Everyone was celebrating the impressive victory of one of the most formidable punchers of all time.”

Wilder vs Ruiz: prediction from an ex-rival who also fought Klitschko

The businessman believes that such a short meeting “cannot be considered as a “warm-up” for Deontay” – this is, they say, his typical fight.

“Now Fury is likely to face this American fireball for the fourth time,” suggested the head of the Council. “While the question of when his fight with Fury will take place is decided, Deontay has other opponents to stay active, focused and sharp. Ruiz, Ortiz or Oleksandr Usyk.

At the same time, Suleiman made another suggestion that “there could be a trilogy between Usyk and Anthony Joshua.”

But Teddy Atlas believes that there is a more interesting thing than a knockout in a minute.