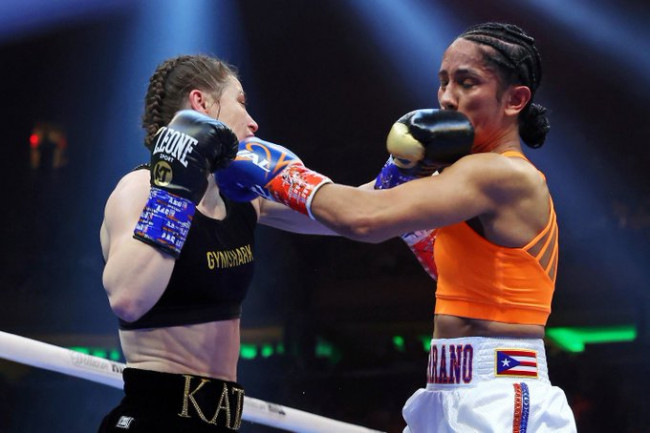 Madison Square Garden, New York, USA. In the main event of the show – the greatest match in the history of women’s boxing – the leaders of the “pound” met. Absolute lightweight champion and winner OI-2012 Kathy Taylor (21-0, 6 KOs) from Ireland gave away the victory over Puerto Rican Amanda Serrano (42-2-1, 30 KOs), who conquered a record 7 weight divisions.

Left-handed favorite Serrano took the center of the ring. Taylor acted from her opponent, circled around the ring, relied on manual speed – the start of the fight showed that this was a justified decision. In response, the Puerto Rican increased the speed and density of the battle even more. She lacked combinational work a little – she threw out only single blows.

Round 3 was interesting. Taylor was ahead of Serrano, she cut through the air, but at the end of the two-minute period she scored a couple of hits – her blows are harder. The champion has a cut near her right eye.

In the 5th round, Serrano imposed power boxing. She confidently interrupted Taylor, and the referee was close to stopping the fight – the Irishwoman could hardly stay on her feet, her nose was bleeding. She is being beaten!

Taylor tried to return blows with blows, and in the 7th round, her footwork even returned to her. Serrano needs to re-inflate the density of the fight. In a tactical shootout, she can’t beat the champion. It is not clear why she took a break and allowed her opponent to return to the game.

The decisive round ended with a bang – the champions continued to fight even after the gong, as no one simply heard it. Very competitive. Great fight!

WHAT A FINISH. WHAT A FIGHT.