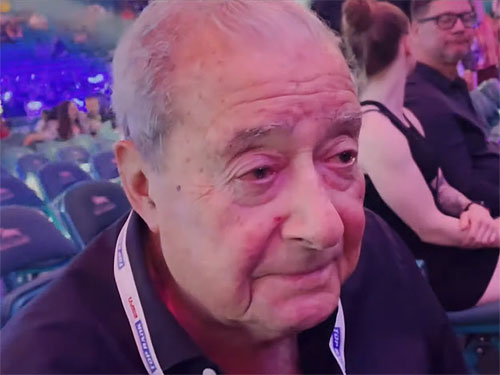 In a conversation, the functionary touched on the possible end of Fury’s career, spoke about the rematch between the unified champion from Ukraine Oleksandr Usyk (19-0, 13 KOs) and ex-champion from Britain Anthony Joshua (24-2, 22 KOs), and also commented on the future unification a duel between light heavyweight champions (up to 79.4 kg): American Joe Smith Jr. (28-3, 22 KOs) and Canadian Artur Beterbiev (17-0, 17 KOs).

“I know that pretty soon you will have a meeting in Las Vegas with heavyweight champion Tyson Fury. What do you expect from this conversation?

We will have a social meeting. We’re having dinner, and whatever he comes up with, we’ll talk about it. This does not necessarily mean that he will talk about retirement. Tyson Fury needs to be given time. He must decide what he wants to do. Once again, I’m not going to pressure him with answers and everything. There is no reason for this. We’ll just have a nice conversation.

When I asked you about his retirement last week, you kind of made it clear that it would be stupid.

“That’s not the point here. When he says he is ending his career, he means it. He is ending his career. But that means it’s now. But if it happens in 2 months, it will be a problem. As soon as the Usyk-Joshua rematch takes place, I think the blood will begin to boil in his body.

Bob Arum on Tyson Fury’s retirement: He has two more fights in America under his contract

– Undoubtedly. By the way, what did you hear? I know Eddie Hearn said that the rematch will take place sometime in July.

– Do you expect any problems with this fight or do you know where it will take place?

This is Eddie’s work. I won’t comment on it. I’m sure it’s a very good fight and I’m sure he can find a place for him wherever he wants.

“Obviously a Fury-Joshua fight because of the British fans or even a Fury-Usyk fight is going to be a sensational fight.

— Yes, I agree. Need to see. I think Usyk-Joshua will be a very good fight. Frankly, I expect Usyk to do the same things he did in the first fight.

– You have a significant light heavyweight fight finalized: Joe Smith – Artur Beterbiev. What can you tell about this fight? Where will he go?

How good will this fight be?

“Two big real punchers. Couldn’t be better. This fight will be even bigger than the Stevenson-Valdez fight.