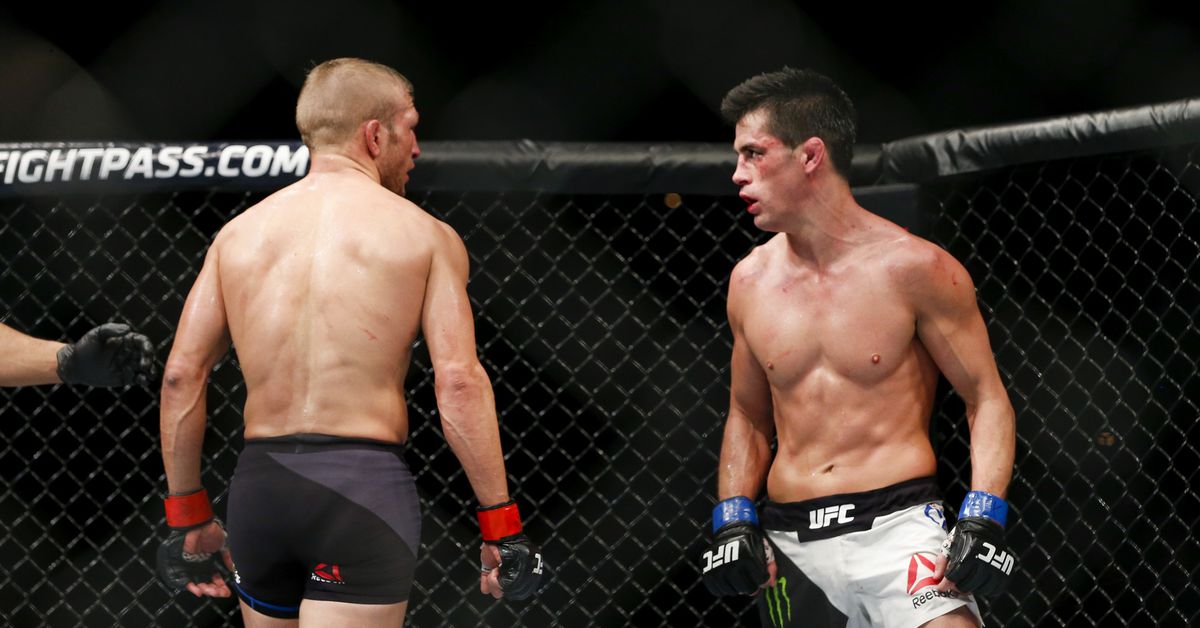 T.J. Dillashaw has a simple explanation for why his longtime rival Dominick Cruz has been questioning his title challenger qualifications: Envy.

Cruz recently appeared on The MMA Hour where he compared Dillashaw being the front-runner to fight UFC bantamweight champion Aljamain Sterling to “a hook-up.” Dillashaw was stripped of his UFC title and suspended from competition for two years after testing positive for a banned substance in January 2019. In July last year, Dillashaw defeated Cory Sandhagen in a split decision. However, it wasn’t enough for him to be the No. 1 contender again in Cruz’s eyes.

“He was suspended for cheating, so to get a shot after one win, OK, cool,” Cruz said. Cruz said, “Sounds like an illicit hookup.” He was able to get two years of his salary, and he didn’t lose much money. Then he just goes right back in [the title picture].”

Told of Cruz’s comments, Dillashaw offered a fiery response during an interview with Submission Radio.

“He seems like a salty ***,, to be truthful,” Dillashaw stated (transcription by Denis Shkuratov). “I just think he’s obviously jealous of me being able to stay in the top with my layoff, and how long I’ve been in the sport and me still being able to come back and prove that I’m still the best. I did lose money. Me not fighting for two years while being a champion is a lot of money out of my pocket. [If I keep] getting titles defenses and winning, those are millions upon millions of dollars I’ve let go because I was f ****** dumb.

“I paid my dues, came back, and I f ****** worked to win that win with f ****** only one leg, one eye. There’s no way you could deny that this is my chance. He’s being salty as I mentioned. That’s part of his personality. He is not a very likeable guy. He’s not a person I like.

Dillashaw and Cruz previously fought in the main event of UFC Boston in January 2016, with Cruz regaining the bantamweight title via split decision. A second fight between the two never materialized, as Cruz went on to win a trilogy bout with rival Urijah Faber before dropping the belt to former Dillashaw teammate and future opponent Cody Garbrandt.

At the moment, Dillashaw could not care less about facing Cruz again.

“I’ve got bigger fish to fry, to be honest,” Dillashaw said. All the chips are sort of lined up, so I take my belt off, [Henry] Cejudo says he is coming back. Jose Aldo is your opponent. I think there’s a lot more dangerous and notable guys to fight.”

When Dillashaw is scheduled for his next fight, it will be over a year after his last one. He has been recovering from the injuries sustained during the fight against Sandhagen. He was initially optimistic that he could return to competition sooner, but the reality is that the 36-year-old had to undergo a lengthy recovery process before being cleared to fight again.

“I wish it was only three months, that s*** was crazy,” Dillashaw said. It was an extended recovery. I tore every ligament in my knee besides my ACL. If I’m gonna do something, I’m gonna do it right. It was more than three months. I guess I was being optimistic. The truth is that I wasn’t thinking “Oh, my ACL didn’t break, so I’m fine” when I said three months. But actually I had to have two surgeries done on my knee to get to where I’m at now. But the road has been great, and it all worked out timing-wise. It’s all good.

” I just beat a No. 1 contender fight, which I actually think is a more dangerous guy, on one leg,” Dillashaw added. “So, I could f****** beat this chump [Sterling] coming up soon on one leg as well. I’m not too worried about him. Cory Sandhagen seems to be a much tougher fighter than he appears. And if he had a little more well-roundedness, he’d be even further along. But I just feel that nothing’s gonna hold me back from getting my belt, no matter what it is. If I gotta go in there and fight with one arm, one leg, one eye. It don’t matter.”