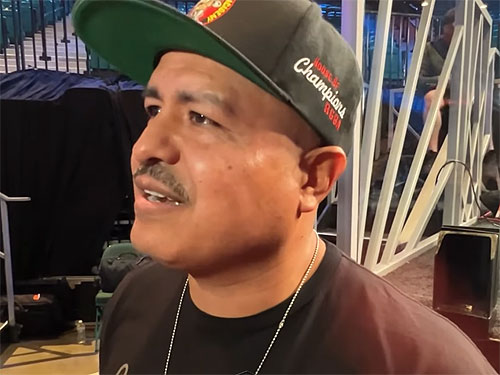 The famous American coach, former world featherweight champion Robert Garcia, in an interview with American journalists, gave an assessment of the future confrontation of the absolute champion in the second middleweight (up to 76.2 kg) Mexican Canelo Alvarez (57-1-2, 39 KOs) and ” super champion” according to the WBA light heavyweight (up to 79.4 kg) Russian Dmitry Bivol (19-0, 11 KOs), which will be held on May 7.

The mentor also appreciated the possibility of a Mexican duel against the unified champion from the Russian Federation Artur Beterbiev (17-0, 17 KOs) and former US champion David Benavidez (25-0, 22 KOs).

Will Canelo have a tough fight with Bivol next week?

“I think it will definitely be a difficult fight. Bivol is a very strong guy, very big, tall, and he uses his reach very well. But I still choose Canelo to win. He’s too strong for this division right now. I don’t think anyone can beat him. But this is a tough fight. Some of my guys sparred with Bivol and he did very well. He’s tall, swings, he’s very strong and motivated to win.

– Will the fight be like two fights with Golovkin?

– It’s possible. Plus, these guys are much bigger, taller. There will be no easy fight.

How will Canelo counter direct punches?

“Canelo has a good defense, a good block. He will block most of these punches and he will find a way to win. Canelo is very good at this. Of course, he will work on the body and I think he will finish him in the later rounds.

“Benavides is fast, strong, hungry, and he’s Mexican-American. This is what the fans want to see. But I also understand Canelo. Canelo gives chances. If he said that Benavidez has to earn it, then he needs to beat someone like Caleb Plant, Charlo at 72kg.

Do you think he will beat them?

“Yes, I think he will beat them both. And then he will earn a chance to fight Canelo. Canelo is giving chances now. He has a right to it.

People say that Beterbiev will be a big test for Canelo…

“I think Canelo will be champion there again. He wants to become the absolute champion at 79.4 kg. Beterbiev will unify the titles. And then all the titles will be at stake. It will only take one fight to become the undisputed champion again. This could be Canelo’s next move next year.

Is he a threat to Canelo?

One thing about Canelo is even if you are too fast or too strong, Canelo will find a way to win. Canelo is just the kind of fighter we see once every 20 years. You don’t see that often. He adapts to everything, he is very strong physically, you just can’t hold back. It doesn’t matter if you’re too fast or whatever, he’ll find a way to get to you.

– You said that your guys sparred with Bivol. I have seen Bivol’s work several times myself. Nobody talks about his body work. Do you think he will be able to get the body work to Canelo when Canelo goes for him.

“It won’t be easy because he’s a lot bigger and if he focuses on bodywork it means he’ll stay in front of Canelo to try and land those body shots. I don’t think it’s very convenient for him. And that will be to Canelo’s advantage because it will put him in a position where he can land punches a little faster. I think it’s smart for Bivol to do what he does in the gym: fight smart, stay at range, use his reach and those long, straight punches.

Dmitry Bivol: “Alvarez has already been beaten before”