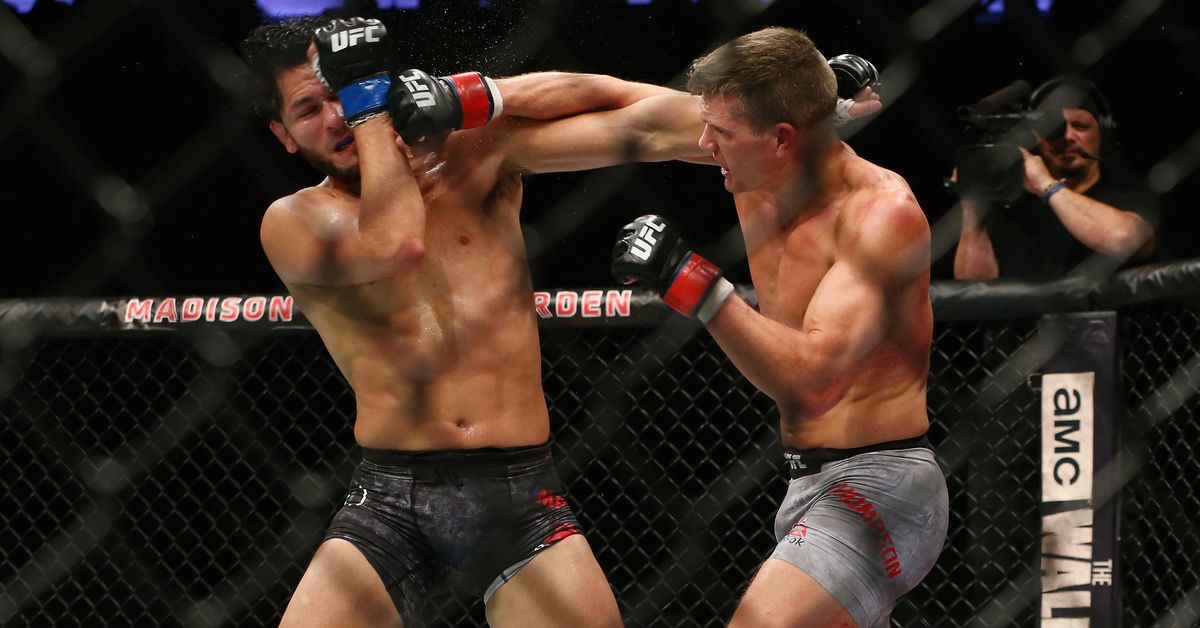 Jorge Masvidal may currently be dealing with some outside-of-the-cage issues, but Stephen Thompson is hoping when that’s all settled, the two can mix it up inside the cage once again.

Thompson fought Masvidal in an earlier featured welterweight bout at UFC 217,, with Thompson taking a unanimous win. Masvidal reinvented himself and became a knockout performer, winning the “BMF” belt. He also challenged Kamaru Uman twice for UFC’s welterweight title. Both men have struggled lately though, and as a result, Thompson thinks now is the time to run it back with “Gamebred.”

” I’m one rank higher than Masvidal, and he is a striker. UFC, give me a striker. Give me somebody that wants to stand there and strike, please!” Thompson said recently on The MMA Hour. “Masvidal would be awesome. The NMF [Nicest Motherf*****] and the BMF [Baddest Motherf*****]. have been a topic of conversation for quite some time. I know Robbie Lawler was thrown out there as well. Even though he’s not ranked, he’s still an exciting opponent, a guy I’ve been trying to fight since he was champ, so there are some guys there.”

Masvidal currently has a 3-fight skid. He lost two bouts to Kamaru Uman and dropped a unanimous decision against his bitter rival Colby Covington. Masvidal was especially hurt by the Covington defeat, because he couldn’t answer the heavy wrestling attack his friend had brought to the cage. Thompson acknowledged that he feels the same way, as he did in the two previous bouts. However, the “Nicest Momf *****”” took issue with what Masvidal had done since then.

“I have been there,” Thompson stated. “I just wanted to give him a big hug, like, ‘I’ve been there, bro.’ I’ve been with the guy that’s just constantly taking you down, and he’s the guy that just wants to bang. He will fight if he is able to find someone who wants it.

“So he wasn’t able to pull it off and then you’ve got the fight, on the street, after the fight, which I thought was like, come on guys. We get paid for it. Let’s go. You ain’t gotta be doing that in the street. It is just what it is.

Unfortunately for Thompson, it is unlikely that the stars will align in this rematch. Masvidal is handling his legal matters so it may be awhile before “Street Jesus,” Thompson steps back in the cage. Thompson hasn’t competed since December and hopes to make a comeback soon.

“Hopefully soon,” Thompson said when asked about his timeline to return. “After my last fight, I had a collar bone issue. Ended up tearing the cartilage in my collar bone, which is an old injury. It was inflicted during Matt Brown’s fight. But I’ve healed up from it, I’m feeling good, back in training camp with Chris Weidman.

“We’ve been training together. He is an absolute monster. The guy is coming back strong, and he feels good. We can hopefully get back to the same card. That would be awesome.”