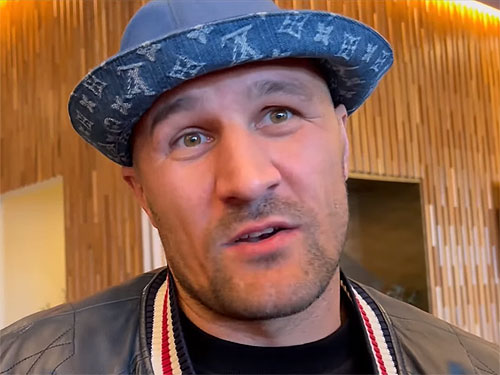 Sergey
told about his training camp, expressed his opinion about the resounding victory of WBA “super champion” Russian Dmitry Bivol (20-0, 11 KOs) over the leader of the pound-for-pound Mexican Canelo Alvarez (57-2-2, 39 KOs), and also commented on the reality fight against Bivol in the future.

– Sergey, how is the training camp? It’s good to see you back in the ring.

The camp went according to plan. Things are good. But some plans have been changed.

– Because of the replacement of the opponent?

– Changed sparring partners. Camp started in January [смеётся]because I was training for a Chinese fighter who was left-handed. I sparred with southpaws, and then everything fell apart. I rested for two weeks, returned home to Florida, rested with my family, and then went back to training camp and started sparring against righties. But it’s all good. Saturday will show who is who, what is my form, what are my conditions.

– Are you looking forward to returning to the ring?

— Yes, I am looking forward to returning to the boxing world as a boxer. I am very motivated, very happy.

Fight Sergey Kovalev – Tervel Pulev: he could drink the sea – preview by WMMAA

Bivol won the victory against Canelo. This is your compatriot. How do you like Bivol’s victory, does it motivate you?

“It’s a great win. Even before the fight, I thought that Dmitry could win, because there is nothing unattainable. Just do your job and you should be a champion.

How good was Bivol?

“He was smart, he had a smart plan, he didn’t force things, he kept everything under control, he used his legs, he controlled the distance. Canelo looked very tired after the third round. I don’t know, maybe the training camp, maybe he didn’t appreciate Bivol enough.

– Did you notice that it was different from the fight with you?

“When he fought me, it was two different situations. I was out of energy when I fought Canelo. Believe me. The last two years that I fought at light heavyweight, it was very difficult for me to make weight. I had a fight in August, and after 8 weeks I was already fighting Canelo. They didn’t even let me rest. But it was a challenge. I never avoid trials and challenges from my opponents. If someone calls me, I must agree. But then I didn’t do enough in terms of energy.

“Bivol had the same plan as you?”

– My advice to Dmitry was – just do not force your training, do not prepare for something incredible, do not believe that this is something incredible. Everything is possible. Be yourself and do your job, use your legs and be a champion. And my other opinion is that Canelo underestimated Bivol for this fight. He was a little relaxed, after the third round he already looked tired, slow. I don’t know, maybe training camp, maybe underestimated. He was weak, not what he should have been. Maybe it’s psychological, maybe food, maybe training camp – I don’t know.

Sergey Kovalev told what worries him before returning to the ring

– What would you do in Canelo’s place – would you go for an immediate rematch with Bivol?

– If there is a rematch, it will be the same, because now Bivol is more confident in himself. Even if Canelo is better, Bivol will also be better. Because now he believes in himself more.

– If Bivol beats the winner of the Beterbiev-Smith fight, would you like to fight him for all the titles?