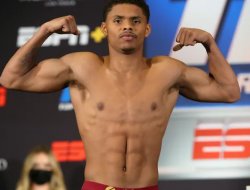 On the night of September 23-24, Top Rank boxing evening will be held in Newark (USA), the main event of which will be the fight of the WBC / WBO world champion in the second featherweight (up to 59 kg) American Shakur Stevenson (18-0, 9 KOs) and Brazilian Robson Conceisau (17-1, 8 KOs).

This is the first time Stevenson has to defend two titles at once since he won the unification against Oscar Valdez in April. But it may happen that he will no longer be a champion in the ring.

Today, the official weigh-in of the boxers took place, and Shakur could not meet the necessary limits – the scales under the asterisk showed on 725 grams more than expected.

Now the American has two hours to drive off the excess. Failing that, the titles will become vacant and will only be at stake for his opponent.