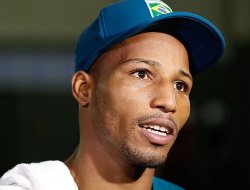 The 2016 Olympic champion Brazilian Robson Conceição (17-1, 8 KOs) is preparing to make an upset in the upcoming fight against the former champion in two categories of the American Shakur Stevenson (18-0, 9 KOs), taking advantage of his dismissive attitude towards himself.

Recall that two championship titles in super featherweight (up to 59 kg) will be at stake – according to the WBC and WBO versions. But only for Conceição, since Stevenson, who previously owned them, failed the official weigh-in, after which he announced the transition to the next category.

“Shakur is definitely underestimating me and it will be the biggest mistake of his career to underestimate an opponent like me who is really hungry and hungry to win. He had never dated anyone like me, an athlete of that stature. This will be his downfall,” predicts the Brazilian.