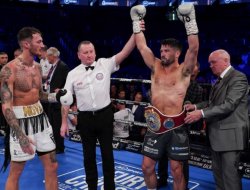 The fight ended in the 4th round. The favorite complained about the injured hand, was forced to withdraw from the fight. Both are disappointed.

Who would have called this?!

Zack Parker has had to pull out after the 4th round due to an injury to his hand.@_John_Ryder_ has been awarded the victory.#ParkerRyder pic.twitter.com/7IZJ89jaA0

Looks like he has a superfight in London against Canelo Alvarez in May.

As part of the show, the local middleweight prospect (up to 72.6 kg) Hamza Shiraz (17-0, 13 KOs) did not notice the resistance of his compatriot
Rivera Wilson-Bent (13-2-1, 6 KOs) and defended the title of WBC silver champion.

Shiraz rolled over the opponent, who could not compete with the favorite in firepower. Already in the 2nd round, Wilson-Bent’s left eye was almost completely closed. Hamza drove the opponent into a corner, forced him to take a knee. The referee decided that it was not worth continuing further. He is right…

.@sheeraz_hamzah at his brilliant best!

Wilson-Bent could not keep up and the referee had to step in #FightNight pic.twitter.com/Igq6tKLtj6