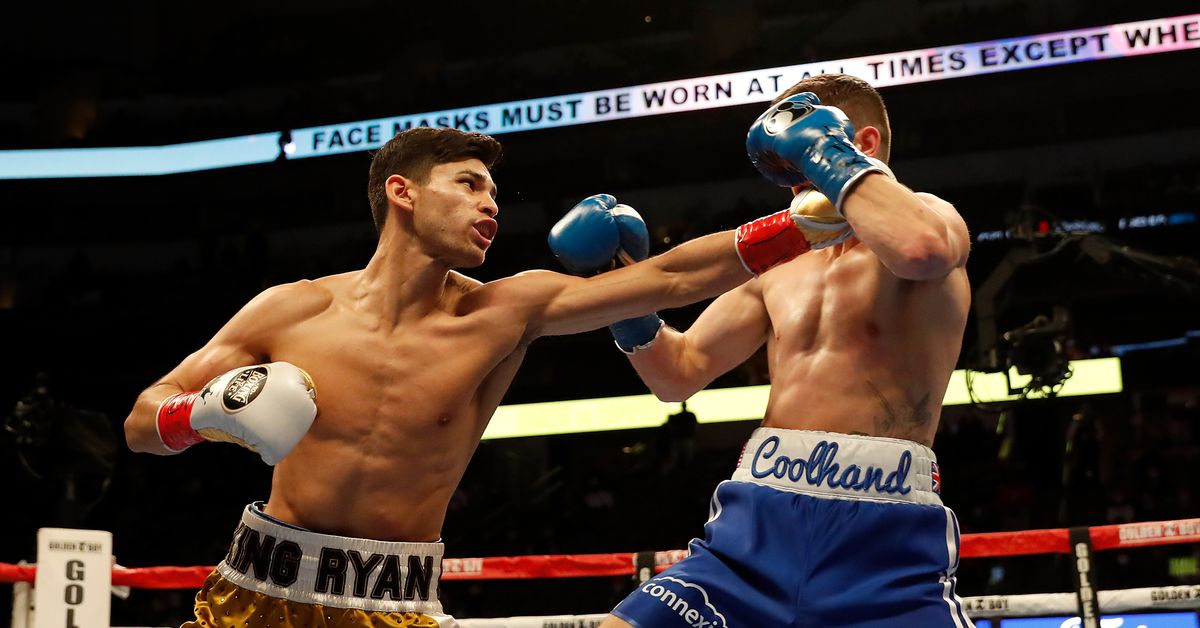 Ryan Garcia believes that the toughest fight of his career has only made him more dangerous.

In January of last year, Garcia won a vacant interim WBC lightweight title with a seventh-round TKO of Luke Campbell, but victory did not come easily. Campbell scored a knockdown of Garcia in the second round of the contest, putting Garcia on the canvas for the first time in the 23-year-old’s career.

Garcia (22-0, 18 KOs) returns to action this Saturday when he fights Emmanuel Tagoe (32-1, 15 KOs)) in San Antonio and he views the Campbell fight as a valuable learning experience.

” I learned two things,” Garcia stated on The MMA Hour .. “One, I learned how to react if I ever got dropped because I never got dropped in a real fight in my life and I kind of imagined that’s how it would be, I would come at the person like, alright, now we’re really fighting.

” And then, second, Campbell didn’t need me to begin so fast. You can see that I began the fight very quickly and could probably have broken him down much more slowly. He was put on the backfoot immediately, but those were the only two things. Patience, because I’m a natural born boxer, puncher, I didn’t need to press the fight so quickly on the get-go and then second, how I’d react and that’s how I imagined. So I feel good that I know that if somebody brings that out of me, just start running because I’m gonna come at you.”

The more aggressive side of Garcia may come out against Tagoe, especially given that the Ghanaian fighter has been open about questioning Garcia’s abilities in the lead-up to the fight. In a recent interview with The Boxing Voice, Tagoe said that he expects to defeat Garcia “easily.”

Garcia welcomes the trash talk, though the more he hears from Tagoe the more eager he becomes to shut him up in the ring.

” I don’t know where to start,” Garcia stated. “I’ve watched him fight and normally I would want to talk s*** back but I don’t need to. What’s going to happen to him, I know. No words are gonna change the fact of how I handle him in that ring April 9. Let him air it out, have fun, and let him know that I will be punching him in the ring. I’m not here to play games, I’m running right through him and the more he laughs the more I’m gonna be punching, I promise that.”

“I’m competitive so once you get under my skin a little bit, it gets worse,” he added. “So don’t be surprised in that ring if I really punish him.”

Prior to the Tagoe booking, much of the conversation surrounding Garcia’s future was how he would handle his internal struggles as he has been open about taking time off from fighting to tend to his mental health.

Garcia would like it to be clear that despite what Garcia may have gone through in his private life, Garcia’s professional goals remain the same.

” Garcia answered when Garcia was asked whether he thought about retiring. “No chance. No, because it wasn’t about boxing, not at all. This had absolutely nothing to do boxing. Boxing is my passion. Boxing is all that I have done throughout my life. It wasn’t fighting, but it was the only reason I felt the way that I did. Now that I’ve matured and I’ve realized a lot of things, I feel so much better. It’s all about being great in every aspect of your life. Not only how you train and in the ring, but also how you treat yourself.

” “It’s all about the people and things you surround yourself with.” he said. “If you want to be great inside the ring, you have to be great on the outside of the ring so I removed a lot of the stuff in my life that maybe wasn’t affecting my boxing career but it was affecting me mentally and spiritually so I definitely got rid of a few things.”

With his admission of his struggles came criticism, some of which got under Garcia’s skin. But overall, he’s glad that talking about mental health was not only helpful to him, but to others as well.

” It wasn’t difficult for me due to my personality,” Garcia stated. Garcia said, “I am very open with many things and I have a great personality. But it was difficult to listen to all the criticisms and negative comments about my character as a fighter and me.” So that was a little hard.

“Other than that, it’s good because of all the things that came out of it and all the people that have came up to me and said I’ve helped them through their own troubles by speaking up. There’s a lot of benefits to what happened and I’m happy with the decision I made to publicly come out and say that I was struggling.”