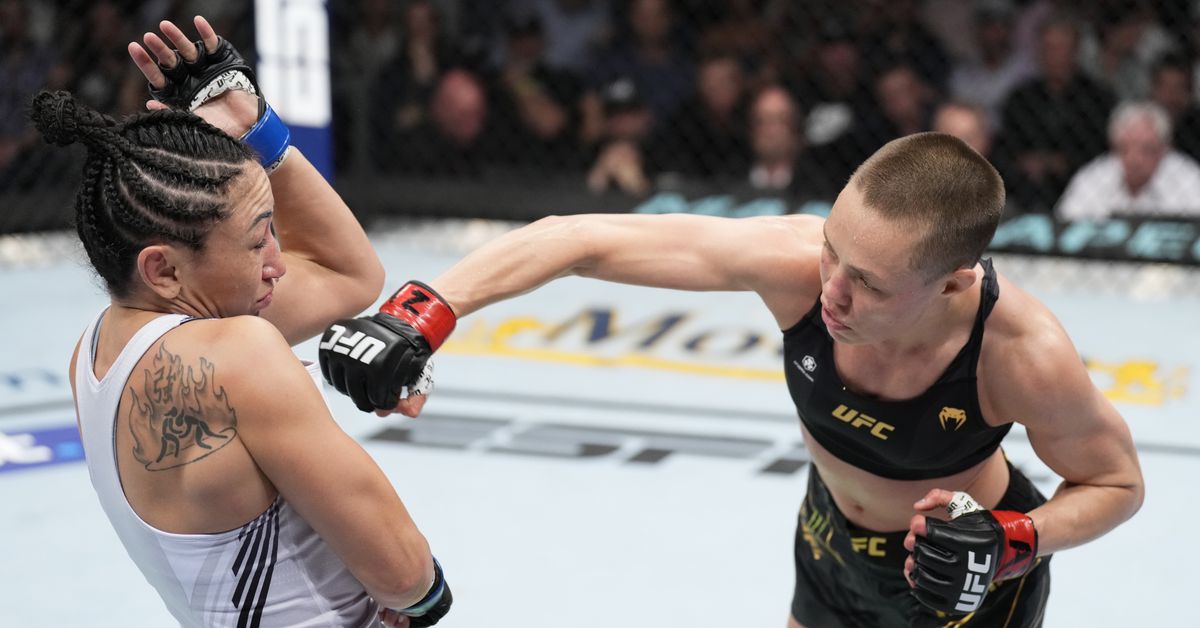 Rose Namajunas believes she should still be the UFC strawweight champion.

Saturday night’s co-main event at UFC 274, Namajunas saw her put her strawweight championship on the line against Carla Esparza, a former champion. It was, to put it mildly, bad. For five rounds, Namajunas and Esparza stared at each other in a listless battle that had the commentary team openly poking fun at it. In the end, Esparza reclaimed the strawweight title with a split decision that immediately had the fans booing. The postfight press conference , Namajunas wasn’t too happy with the result.

“I won that fight,” Namajunas said. I stuck with the strategy. I felt as if I landed more shots. I even took her down. I didn’t feel any control or strength in her takesdowns. She hit me with, I’d say one good punch and maybe another time her forearm clashed into my nose at some point when we were both standing up, but other than that, maybe a couple low kicks but I didn’t feel them or anything.

“I felt like I did the damage, I controlled the fight, and I’m proud of myself because I stuck to the strategy. Because I know that in all of Carla’s fights she baits people in and tries to get people to attack her, so it’s like, ‘No.’ I’ve been in slugfests before, I’ve gotten my nose broke, I’ve stood there and shed blood in the octagon, so I stuck to the strategy and she didn’t really have any offense. She was whiffing at air the whole time. I was certain I had won.

“I’m really still trying to process this because I’m not trying to be salty or anything. I feel like there’s something to be learned from each loss. There were times when I felt like I could capitalize more and be more offensive. But every step I took, my foot would fall. It was safer for me to stay safe. That’s a decision I made in that moment, but like I said, I’m an exciting fighter. I’m a finisher. I’ve got one of the highest finishing rates, so I don’t think that I was getting the boos. I’m pretty sure that was Carla. “Obviously, I like to see exciting fights so it does kinda sting a bit too.”

Namajunas explained why she thought she was deserving of the award, stating that her footwork and distance managing skills had done more damage than she could have.

“I feel like I hit her a few different times, especially an overhand right landed super clean,” Namajunas said. It will be interesting to watch the video again, but I can recall landing some nice uppercuts and punches that were not super strong but kept her away. I felt I was making contact and making the fight more manageable. This is something I have to think about because it’s so annoying. Salty sounds are what I don’t like because I am losing. F***. But at the same time, it’s just what makes sense to me right now.”

Officially, Namajunas did out-land Esparza by a count of 37-30, connecting on 27 percent of her significant strikes. But, she also stopped takingdowns and briefly controlled the fight, which was enough in an extremely tight bout. It certainly was for judge Rick Winter who scored the bout 49-46 for Esparza, a score that Namajunas doesn’t understand.

“That’s surprising,” Namajunas said. “I was thinking, OK, maybe. [but] But I’m not sure what you can count. I wasn’t hurt by the low kicks, but they were a good idea. The low kicks didn’t even do any harm. Maybe that was the takedown. Maybe all her attempts but I stuffed all of those. Although she attempted to grab me several times, it is not clear how often. Maybe the judges wanted to see another slugfest or some other thing so didn’t appreciate good strategy. But, like I said before, I am always involved in thrilling fights. A strategic fight is impossible for me. I’ve got to f*** up this face? No. F*** that.”

Unfortunately for Namajunas, strategy and defense are not actual scoring criteria under the unified rules and so, “Thug Rose” now finds herself down 0-2 to Esparza. And as much as she respects Esparza as a fighter, it’s clear that Namajunas isn’t happy with having lost her title in this fashion.

“Carla. I respect her work there but I can’t imagine how she could be the champion.” Namajunas stated.