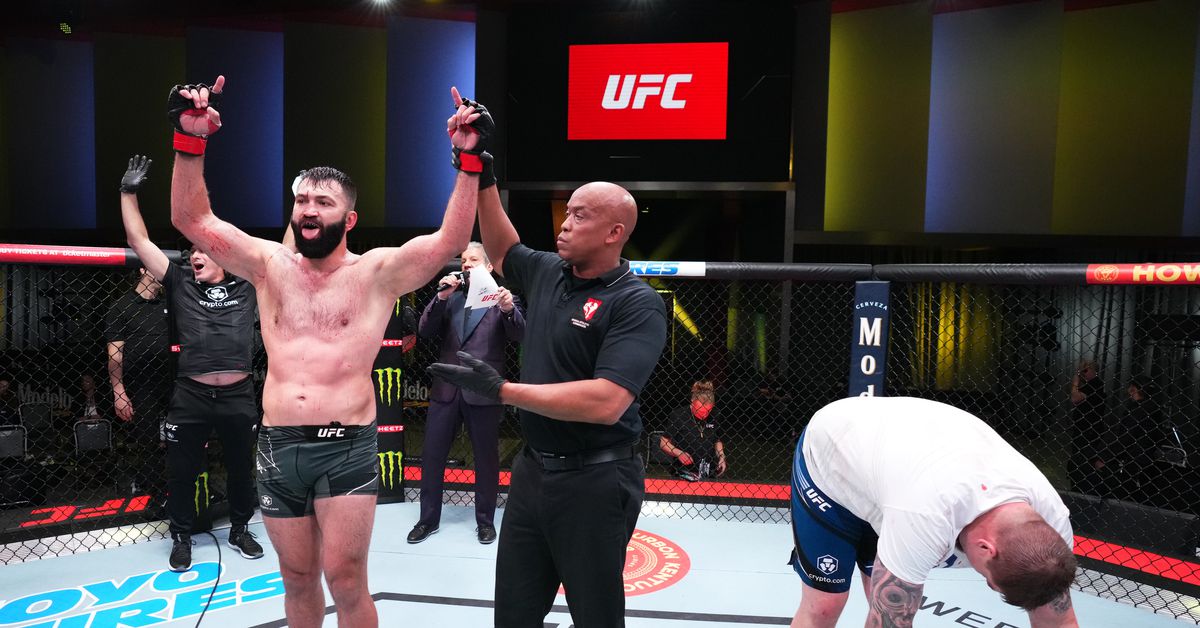 Few things infuriate MMA fans more than a fight being scored incorrectly, though the term “robbery” tends to be thrown around carelessly and is often steeped in bias. With Robbery Review, we’ll take a look back at controversial fights and determine whether the judges were rightly criticized for their decision or if pundits need to examine their own knee-jerk reactions.

Andrei Arlovski is a man who, like life, just seems to find a way.

Arlovski picked up UFC win No. 23 in the co-main event of UFC Vegas 53 on Saturday, moving him into a tie for the most victories in promotional history with Donald Cerrone and Jim Miller. He had to get past Jake Collier to win the co-main event of UFC Vegas. While his peers were pleased for him, they also had to acknowledge that the judges may have done him a favour.

Even if you disagree with the decision, @AndreiArlovski is an absolute LEGEND. #Respect #UFCVegas53

One judge thought Andrei Arlovski was Jake Collier. You didn’t hear that from me tho . I’m not the one to be starting rumors #UFCVegas53

Just like that, the GOAT, an ageless heavyweight, is on a 4-fight win streak. He has won in six of seven fights and lost only to British star Tom Aspinall. If you look at the scorecards these days with Arlovski, it’s very likely that the fight will not go your way. Frankly, we’re thinking of implementing a rule where if you’re a UFC heavyweight that can’t definitively beat the 43-year-old Arlovski, then going the distance with him means you automatically lose.

In reality, no such rule exists and Collier would probably like to have this decision reviewed. He’s in luck, because that’s exactly what we do around here. Let’s get started in the Robbery Review Film Room.

Props to Jake Collier for his efforts to make sure that the fight was not accepted as Andrei Arlovski. On a scale of 1-10, with 10 being the most Arlovski-ish, this fight is probably a six at best; which is to say that the fight turned out to be entertaining as opposed to a slog and Collier was actually able to execute some of his usual techniques.

Collier bullied his way in right away, but Arlovski refused to give up an early takedown. Lots of ineffectual striking in the clinch to start. When they separate, Collier gets a couple of leg kicks to land. Although it’s nothing, Collier managed to do something in the initial two minutes. Arlovski did very little. Collier began to string together combinations against a retreating Arlovski. He responded by a couple of good counters. We got a break in the action due to a clash of heads and that’s the last time I’ll mention it because it happened a bunch more times throughout the fight and both fighters were to blame.

A beautiful elbow inside cut Arlovski across the bridge of his nose and that was the best strike of Round 1. Arlovski shook it off and went back to his counter-heavy game plan while Collier continued to stalk him.

Round 2 is one I imagine most fans had difficulty scoring as there was plenty of good leather being traded. The volume was unquestionably in Collier’s favor, but Arlovski was sharp with his counters. Dominick Cruz noted on commentary that Arlovski managed to sneak in some accurate punches between Collier’s aggressive bursts. Collier did manage to score a takedown, though he didn’t do too much damage. They ended the round trading punches.

Collier had a fast start to Round 3 as he was landing and backing Arlovski up. He had a nice jab going throughout the fight, he just got into trouble when he followed up too aggressively and left himself open to Arlovski’s counters. Arlovski had some success scoring with straight punches from distance too, but nothing he threw kept Collier from advancing and scoring. Arlovski’s chin was definitely put to the test in this one. More hard shots from Collier in the final 30 seconds and he even gets a takedown, which Cruz says should steal the round for Collier, which isn’t a thing.

Collier was awarded the first round by all three judges. Crosby and D’Amato gave Rounds 2 and 3 to Arlovski for the win.

After the decision was announced, Collier exited the cage in what appeared to be a show of frustration, but he later clarified the situation on Twitter.

Clarify, it looked like I walked away from @AndreiArlovski at then end of the like a poor sport, I was told to leave the cage, then to go back and he was in an interview. I’d never disrespect an opponent like that, let alone a legend who I have the utmost respect for#UFCVegas53

What did the numbers say?

The significant strike count tells us that this was a close fight as Collier narrowly edged out Arlovski 93-91. Going round by round, the stats go even more against the argument for a robbery as Collier won Round 1 25-20, Arlovski won Round 2 39-36, and Round 3 was a tie at 32-32.

In Collier’s favor is the total head strike count (77-66), which is typically a better indicator of who is doing the more relevant damage. Arlovski had the edge in body strikes (15-7) and a narrow edge in leg strikes (10-9).

Collier won two of the three attempted takedowns, but did not score a ground strike during the fight. These takedowns are therefore not relevant to scoring.

All 14 media scores posted on MMA Decisions are for Collier, with six of those scores giving him a 30-27 win.

Over on the Verdict MMA app, the scoring actually has this one pretty close, but Rounds 1 and 3 are firmly in Collier’s favor.

This is literally the closest title fight in the history of Verdict.

Aljamain Sterling is up on the Verdict Scorecard by a final score differential of 0. 01#UFC273 pic.twitter.com/0LAskmTSzZ

That scoring system takes the cumulative total of every submitted fan score (filtering out aberrant scores like random 10-7s if they comprise less than one percent of the total) in every round and divides by the amount of submitted scores to determine the winner of each round and also in totality.

Due to Arlovski winning the second, the final score only comes out to 28. 82 to 28. 24 for Collier. However, he won Rounds 1 and 3 by 45 points each, so even if there’s no dispute over Arlovski winning Round 2, just going by how we actually score fights that’s an easy two rounds to Collier according to Verdict MMA voters.

The official stats definitely surprised me here as I saw Collier outworking Arlovski on both of my viewings. This is the one instance where my eyes trust the numbers, and I recommend you do so too.

Collier wasn’t content to press the action, but he also landed clear shots that had Arlovski on his back foot multiple times. If Arlovski had 20 significant strikes in the first half, a lot of those had to be clearing the bare minimum to be counted in that category. So that’s Round 1 out of the way.

Round 2 I scored for Arlovski as I felt that he took advantage of Collier’s lackluster defense. Collier, a heavyweight who is so much fun to watch due to his “go-for-broke” style, lost a round because he went straight into counter punches. On the other hand, he also landed plenty so there’s a case to be made for Collier. A tight round I won by Arlovski.

As for Round 3, see my notes for Round 1 and 2. While I would like Collier to not be hit as much, it is true that I do not believe Arlovski has landed as frequently or consistently as Collier. Maybe it’s because Arlovski showed so much toughness that the judges saw fit to give him this round, but it’s not Collier’s fault that Arlovski is just able to eat combinations and might actually be immortal at this point.

came forward to help and proved effective in doing so. This is a victory for me.

Look, it was a competitive and enjoyable fight, but this is a case where the judges have to be able to distinguish between who is driving the offense and who is just hanging in there. It’s Collier who was the better striker in Round 1 and Collier who pressed the action in Round 3.

If you are wondering what the significance of who initiated the action is, the statistics can be very helpful as long as the criteria are considered. Let us never forget that octagon control and aggression are secondary to damage and shouldn’t be brought up unless necessary; however, if you bring up the dead-even official Round 3 stats, then you have to give Collier that round based on that secondary criteria. It doesn’t really matter because Collier won the round based on his effective striking. However, if Collier needs to use octagon controls as your decision-maker then it’s in Collier’s favour.

We all enjoy seeing Arlovski win. But, that is a pleasure we shouldn’t have to be denied Saturday if they had done it correctly.