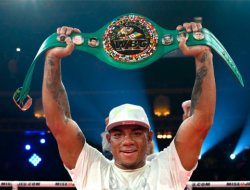 Insiders claim that the first world champion in bridgerweight (up to 101.6 kg) in the history of boxing, Colombian Oscar Rivas (28-1, 19 KOs) signed up for an unthinkable adventure. As we reported earlier, on January 14 in Verona (USA), he will box in the heavyweight limit (over 90.7 kg) with the Nigerian puncher Efe Ajagba (16-1, 13 KOs).

It turns out that Rivas is not relinquishing his bridgeweight title. And already on March 15 (!) he will hold an away defense in Poland against the local slugger Lukasz Rozanski (14-0, 13 KOs).

Rivas explained this by saying that “he is not ready to give up the title, but he does not mind being among the top contenders for one of the heavyweight belts.”

The fight in the cruiserweight limit (up to 90.7 kg) between the British prospect Richard Riakpore (15-0, 11 KOs) and ex-world champion Pole Krzysztof Glowacki (32-3, 20 KOs) will take place on January 21 in London (England) as a warm-up cool local cabal Chris Eubank Jr vs Liam Smith.

Insiders specify that the parties have agreed on all the details, but the contract itself has not yet been signed – Glowacki is waiting for the document to be provided to him.

The unified champion of the second bantamweight (up to 55.3 kg) Murodjon Akhmadaliev (11-0, 8 KOs) from Uzbekistan will have to fight his mandatory IBF challenger Filipino Marlon Tapales (36-3, 19 KOs).

Since the parties failed to agree amicably, the IBF appointed a promotional auction – it will take place on December 20th. Boxing teams can still avoid the auction if they can shake hands by then.

Plant spoke about this through social networks.