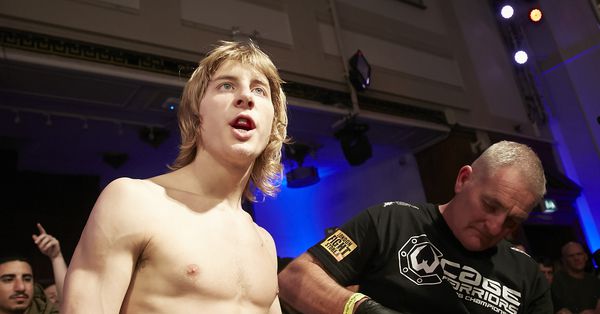 Few things infuriate MMA fans more than a fight being scored incorrectly, though the term “robbery” tends to be thrown around carelessly and is often steeped in bias. With Robbery Review, we’ll take a look back at controversial fights and determine whether the judges were rightly criticized for their decision or if pundits need to examine their own knee-jerk reactions.

A solid UFC London card will be just around the corner. Although it includes a number of ranked fighters that could compete for titles in the near future. However, Liverpool’s Paddy Pimblett is undoubtedly the card’s most popular name.

The Scouser has a habit of making headlines, whether it’s because of his unique hairstyle, multi-million dollar endorsement deals, or penchant for mischief outside of the cage. Pimblett made a name for himself well before his successful UFC debut this past September, and in this edition of Robbery Review, we’re jumping back to one of the biggest fights of his young career and, as it turned out, the most controversial.

A 21-year-old Pimblett was fresh off of a quick TKO win over Johnny Frachey that earned him a vacant Cage Warriors featherweight title and two months later he was set to defend it against former and future UFC fighter Julian Erosa. The matchup was set for Cage Warriors: Unplugged on Nov. 12, 2016, in London, and Pimblett played the role of the conquering hero to a tee.

He did, at least until the bout started. A five-round battle ensued and though Pimblett came out with his hand raised, there were immediate cries of “robbery” when the fight happened and as recently as last year both fighters were open to the possibility of a rematch.

Is it necessary or did Pimblett do enough the first time to prove that he was the better man? Let’s head to the Robbery Review lab and see what all the fuss was about.

Full disclosure: I was able to recall the conversation surrounding this fight, but hadn’t actually viewed it prior to this film. One moment I was sure everyone saw, but I had only a very vague idea of what happened. Let’s get UFC Fight Pass on fire and watch the fight together.

In Round 1, Pimblett came out looking to scrap, which probably wasn’t a bad strategy given Erosa’s unorthodox and tricky style. Pimblett would’ve been exhausted if Erosa hadn’t set the pace so early. As it was, Pimblett showed developing striking skills, but soon Erosa began to land counter punches. Pimblett was able to return to his strengths, and ultimately took the fight to the mat. However, he didn’t take much offense from his takedowns. He did get back control later in the round, so credit to him for that. It’s not close in terms of actual damage.

Pimblett continued to show his natural power in Round 2, but Erosa stayed calm and backed up to the fence where he caught a charging Pimblett with a short counter right to drop him. Erosa ended up on top where he had to deal with Pimblett’s submission attack. He slickly avoided a Pimblett triangle attempt and ended up on bottom where he landed some solid elbows off of his back. Pimblett postured for ground-and-pound, but was caught with a glancing upkick. Erosa stood up and shrugged off another back-take attempt, then resumed jabbing Pimblett’s face.

Round 3 looked to be going Pimblett’s way for the first four minutes as he scored an early takedown and briefly advanced to mount. Pimblett fought off Erosa’s attempts to submit and kept him in control. They were back on the mat with one minute left. Erosa suddenly landed a few jumping knees which clearly injured Pimblett. But was it enough to steal the round?

In the championship rounds, Erosa pressed his advantage and appeared to pull away on the scorecards. Erosa answered his leg kicks by answering with head shots, and was moving Pimblett in the range. The only blemish of Round 4 is that the commentators were frustrated that Erosa couldn’t or wouldn’t put Pimblett away. They urged him to push the pace and finish the fight, which turned out to be a bad omen.

Erosa found his rhythm by Round 5 and Pimblett was struggling to find a way to get in. Pimblett has a takedown attempt stuffed and when they separated, Erosa went right back to work with teeps and low kicks while tossing in the occasional head shot. He seemed to plan to do bodywork until the buzzer went off. Pimblett did land a left hook and fought hard for a takedown near the end of the fight. It was possible that it was too little, too late.

Cartilage and Lethaby both gave Pimblett the first three rounds, while Sledge gave him those rounds plus the fifth.

It’s at this point where I remind you that this is the fight where Pimblett puked during his post-fight interview. Seek out the clip at own risk.

There’s only a trio of scores on MMA Decisions, and they’re all for Erosa with one of the scores from SevereMMA.com calling for a 49-46 in Erosa’s favor.

The reactions to the MMA Twittersphere’s tweets are more interesting, even if they don’t provide any data. We will be looking at some of them here :

Welp. Erosa got absolutely robbed, then Pimblett vomited blood at the end of his post-fight speech.

I thought Erosa beat Pimblett for the CWFC strap

the hilariously drunk judges didnt agree with you

One of the worst decisions I’ve ever seen. https://t.co/upG1klgCm7

shocking decision that. He was absolutely out in the 4th

I feel confident giving Erosa four rounds of five, although at least one was very close.

Give Round 1 to Pimblett for outworking Erosa, who hadn’t quite gotten out of the gates yet. Then Erosa takes the second with the knockdown and a busy jab. Third round is very contentious, as Pimblett was able to neutralize Erosa almost for the whole round. However, I have to give credit Erosa’s two knees at end for being the most important moments of that frame.

That leaves Rounds 4 and 5, both of which I saw for Erosa. Erosa picked up pace in the fourth round, while Pimblett was slow (all three judges agree this round is an Erosa round). I also felt Erosa’s bodywork gave him the final round.

One thing to keep in mind is that I gave little weight to Pimblett’s takedowns, which only occasionally led to meaningful offense.

Erosa caused the most damage, so Erosa deserves a Cage Warriors Belt in his trophy box. This isn’t just nitpicking the best moments of the fight either, even looking at each round separately Erosa’s knockdown in Round 2 should given him that 10-9 and his two knees at the end of Round 3 had Pimblett far more hurt than anything Pimblett had done to him in that round. And Rounds 4 and 5 were clear-cut as Erosa got into a groove and Pimblett’s offense was shut down.

Blame it on the rowdy English crowd (and they were all in on Pimblett, his star power is legitimate) or classic overvaluing of takedowns or even Erosa failing to put an exclamation point on his performance, but when you take the time to break down who actually landed the most effective techniques, I don’t see how one can reasonably score this fight for Pimblett.

With respect to the judges, who don’t have the benefit of the clearest angles and replay that we have watching the fight in 2022, we have to break out the rubber stamp and red ink for this one.

Robbery. There’s still time to run this one back!