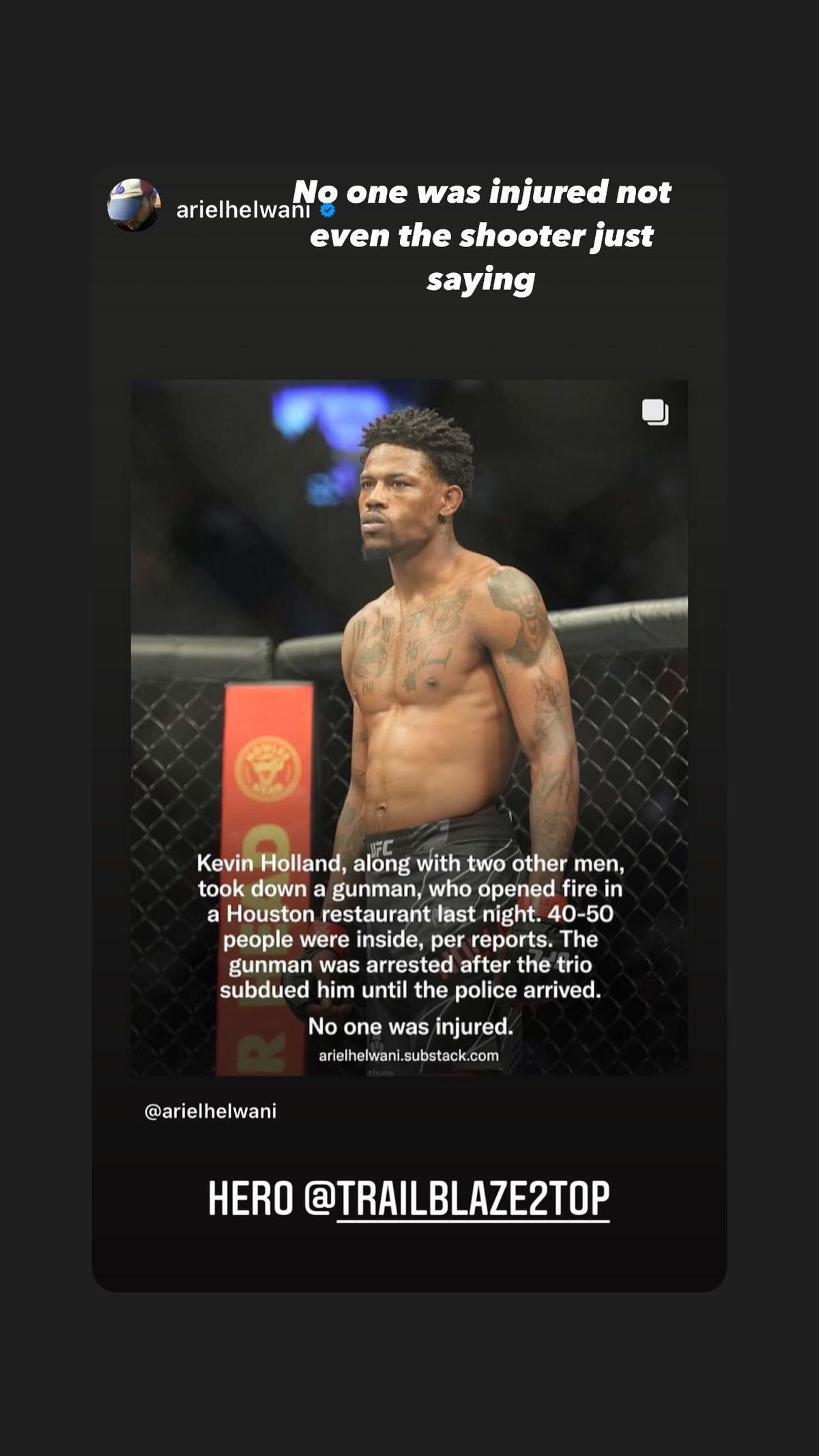 It sounds like Kevin Holland is becoming a real life superhero.

At around 11:30 p.m. local time Monday in Houston, the UFC fighter was reportedly among three patrons that took down a man who pulled out a gun and opened fire in a restaurant that had approximately 50 people inside.

The suspect was taken down by Holland and two other another individuals that were out at the Ra Sushi establishment in the Highland Village area.

MMA Fighting reached the Houston Police Department. A public information officer informed them that they will not name the people involved in subduing Holland because they were witnesses to the crime. They confirmed, however that several inquiries were made into Holland after he posted about it in his Instagram Stories.

Ariel Helwani first reported Holland’s involvement. MMA Fighting confirmed with a source close to the situation that Holland was one of the individuals who helped resolve the situation.

In Holland’s Instagram stories he is seen standing with a man identified by ABC13 Houston as Patrick Robinson, who was interviewed in the aftermath of the incident.

“We were eating, and the next thing you know, a gunshot just popped off. So everything paused and then everybody started running to get down under a table,” Robinson said.

” We got him down and apprehended, took the gun from him as well as the bag he was carrying,” he said.

Holland shared two clips on Instagram, including one in which he appears to be talking about the shooting. He also said that he was not available to talk to journalists.

“Yo they were tripping tonight,” Holland stated. They had a shootout at this ****.. They got into a shootout in this thing. They wanted me to do an interview but I’m like, nah, I’m good.”

“No one was injured not even the shooter just saying.”

So how is the new Batman movie? You can ask for someone to help you. pic.twitter.com/0PkebKnBPg

According to ABC 13 Houston, the suspect faces charges of possessing a stolen gun and discharge of a firearm.

It is the second time in less than six months that Holland has subdue a suspect in a criminal act. This past October, Holland apprehended an alleged car thief in his coach’s neighborhood — which he discussed on The MMA Hour later that week.

“I pull up, I got my coffee mug, so I’m like this time I’m gonna be prepared,” Holland said. “I got my coffee cup. He reaches for his coffee cup and I chase him down. I don’t understand if he is saying “stop” or something else. Then I do the same thing with my coffee mug and hit him with a quick sweep. Get on top, knee on belly, hit him with the little Khabib scarf hold. I grabbed him and put him to the curb. He said, “I can’t breath.” I didn’t want to be like the cop with the Can’t Breathe guy, so I was like f*** it let’s just put him over here.”