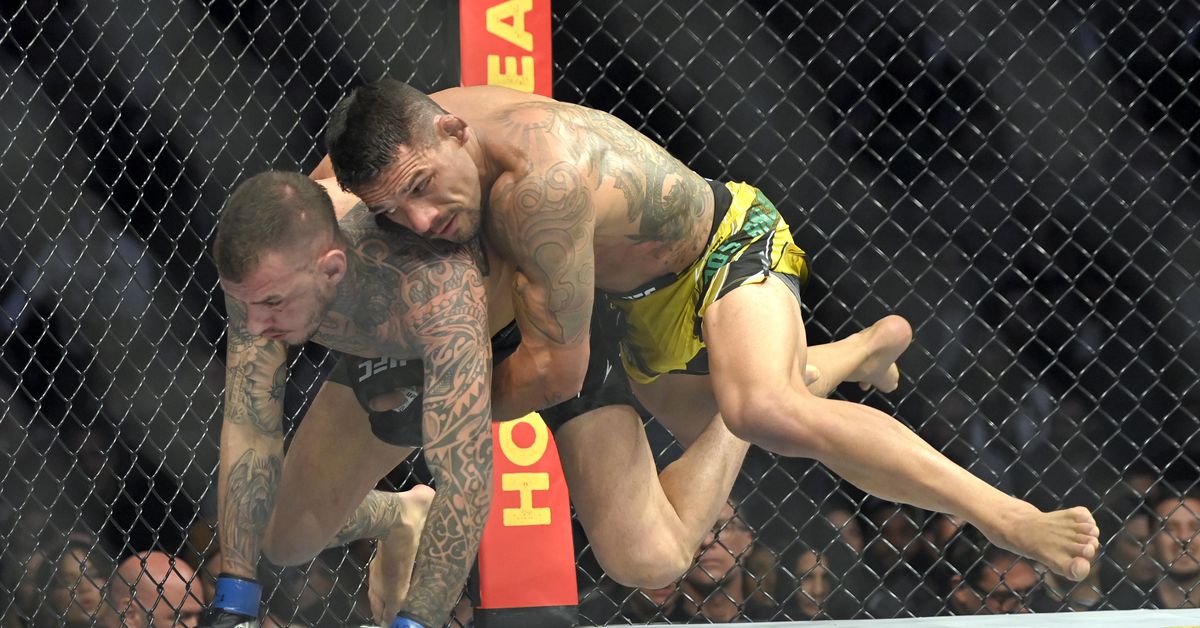 Such was the level of dominance from dos Anjos that the commentary team called for the bout to be stopped by Moicano’s corner between rounds, however Moicano’s coaches allowed the fight to continue, and their fighter even made a small comeback in the fifth round — which, according to the former UFC lightweight champion, was caused in part by just how dominant dos Anjos had been for the first 20 minutes of the bout.

“I was [surprised the fight wasn’t stopped],” dos Anjos said Monday on The MMA Hour. “I told my corner, after the doctor stepped in from the third to the fourth and the fourth to the fifth, they didn’t stop it in the third and I said, ‘They’re gonna stop it for sure.’ But they didn’t. I was told by my coaches to just walk and eat, no need for you to risk anything. He will probably try some wild things right now. He’s probably going to try some crazy stuff right now.

The fifth round was by far Moicano’s best of the evening, and during the fight, the UFC’s commentary team even suggested that dos Anjos was taking it easy on his fellow Brazilian in an attempt to spare him damage that Moicano’s corner seemed unwilling to protect him from. However, dos Anjos says that isn’t true. Instead, he was simply following his own corner’s instructions to minimize risk — instructions that nearly backfired.

” “In those 30 second of the fight I got caught on to my eye,” dos Anjos stated. “I got caught right inside my eyeball and it really hurt. It was the last punch I felt. I managed to finish the fight well, but, I just took my foot off the gas a little bit, knowing that I had the fight, but I got caught on the eye and he came with everything he got on the fifth.

“I’m not gonna say I took it easy on him in the fifth. I went, but I took my foot off the gas because I knew I was four rounds ahead and he’s a hard guy to finish, so my coach said don’t take any risks, just go there, eat some time, walk around, but that’s when I got caught. I think by taking my foot off the gas, he kind of recovered a little bit and felt more confident, that’s why he came forward and threw those shots.”

The bout brought back a debate within MMA about corner stoppages.

While corner stoppages are a common occurrence in boxing, MMA coaches rarely throw in the towel for their fighters. Many believe that this is because of the UFC’s win/bonus system and increased chance of comingbacks from four-ounce gloves. This has encouraged coaches to never give up on their fighters.

And like many, dos Anjos believes this is a terrible outcome for the sport.

“It drives me nuts because I see guys in boxing, all the time people throw the towel, stop the fight, and we don’t see that in MMA,” dos Anjos said.

” I believe that because of their small gloves coaches assume, “He’s going to get a lucky punch, and finish the fight,” but I think it’s important for us all to see more. Coaches should pay more attention to their fighters. The coaches are not reacting and they don’t connect anything that could really harm the opponent. Let’s end this because it’s killing our fighter. I think that’s something that the coaches in MMA should be more aware of.”