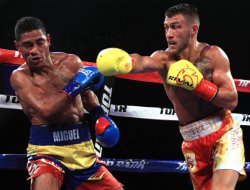 Colombian puncher of the second featherweight (up to 59 kg) Miguel Marriaga (30-6, 26 KOs) unsuccessfully tried to become world champion three times. The last time in the title attempt he lost to the Ukrainian Vasily Lomachenko (RTD 7, 2017).

The puncher has already agreed with the role of the gatekeeper, he has 3 defeats in the last 4 fights, but it’s still fixable – they say on the sidelines that he will soon meet in Dubai (UAE) in an intriguing duel with the ex-pretender from Ireland, the bearded man Jono Carroll (23-2- 1, 7 KOs).

The owner of the WBA Super, IBF and WBO heavyweight belts (over 90.7 kg) Ukrainian Oleksandr Usyk (20-0, 13 KOs) continues to promote the fight for the title of absolute division champion with British Tyson Fury (33-0-1, 24 KOs) , which owns the missing WBC title to the complete collection.

Usyk responded to a recent message from a big man: “Buzzy, the rabbit is already following you!”

Earlier it became known that this fight will take place a little later.

Promoter Eddie HearnMatchroom Boxing) for some reason unexpectedly changed the promotion vector of two of its potential stars – the top contender for super lightweight (up to 63.5 kg) Australian Liam Paro (23-0, 14 KOs) and the top prospect for super middleweight (up to 76.2 kg) American Diego Pacheco (17-0, 14 KOs).

For an American, this will be a significant increase in the level of opposition. Cullen is known for defeating ex-challenger Avni Yildirim of Turkey.

In the main event of the show, ex-world champion British light heavyweight (up to 79.4 kg) Callum Smith (29-1, 21 KOs) will perform. His opponent is still unknown, but it is no secret that this will be an intermediate fight.

On this topic: Beterbiev Yard. Former champion, who lost the title to Canelo, named the favorite

“My phone is ringing with calls about this,” says the promoter. Everyone is asking if I have already signed Berlanga. No, so far I have not had any negotiations on this issue with either the fighter or his manager Keith Connolly. But I think that his fight with Canelo Alvarez would be another great fight in the Puerto Rico vs Mexico series.

In case of victory, the fighter is aimed at fights with the best of the best, he does not even rule out a rematch with Briton Joe Joyce (15-0, 14 KOs), whom he lost ahead of schedule in the fight for the interim WBO title: “Most of all I dream of a rematch with Dillian Whyte. We had a tough fight, he won, but it would be nice to repeat. More options? Michael Hunter challenged me. And if no one dares to go against Joyce, then I am ready to fight him again. But that’s all later. I have an unfinished business on Saturday.”

Mustache to be afraid or — Joyce vs Parker fight report