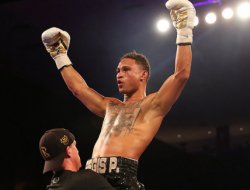 American WBC super lightweight champion Regis Prograis (28-1, 24 KOs) could well have achieved more in boxing if not for his controversial decision to refuse the services of top promoters – they simply (due to a conflict of interest) could not guarantee the fighter fights with all the strongest representatives of the division.

Prograis still had to make his choice – now he is under contract with Richard Schafer (Probellum). The problem is that his promoter does not cooperate with the fighters of competitor Bob Arum (Top Rank) – American ex-world champions Jose Ramirez and Teofimo Lopez. And they are both mandatory contenders.

The latter decided to write about it on social networks, but it didn’t work out very well for him: “This motherfucker calls me to a fight, although he knows perfectly well that by signing a contract with Probellum, he turned into another dude from the gang MTK (hints at the connection of the promotion with the criminal by Daniel Kinahan). It is no secret that any person associated with MTK, is automatically blacklisted in the US. Now it depends only on the WBC what happens next. The only chance to reach an agreement is promotional bidding.”

Prograis’ response: “So I’m on the US blacklist? Is it okay that my last fight (with Jose Cepeda, in which Prograis took the title) was in Los Angeles? Last time I checked, LA was still part of the US. If you don’t want to fight, say so. And don’t make some shitty excuses.”

Prograis does not hide that he would very much like to fight Lopez or Ryan Garcia, because these are very solid fights in terms of money: “Please! Please! Please! Give me one or the other next.”

Garcia issued an interview in response, in which he called Prograis “too slow”, promising to “catch and send him to sleep.” The champion laughed at the promises of the eternal challenger: “I understand that if they fed me Ryan, they would have disrupted his fight with “Tank” Davis. So stay who you are – a model from Instagram. Otherwise, I’ll break your face.”

Garcia replied to Prograis: “You are not at all as good as you think. But you have your own plus – the psychology of the child. The champion retorted: “Well, OK. But both I and the rest of the world know that you are mentally very weak. I would playfully break your spirit.”

Previously, Prograis had already had a good laugh with Lopez. Do you think Teofimo will try to take the belt away from the champion? The promoter does not exclude. And here is the opinion of the top coach: he assessed Lopez’s chances to take the title from Prograis.