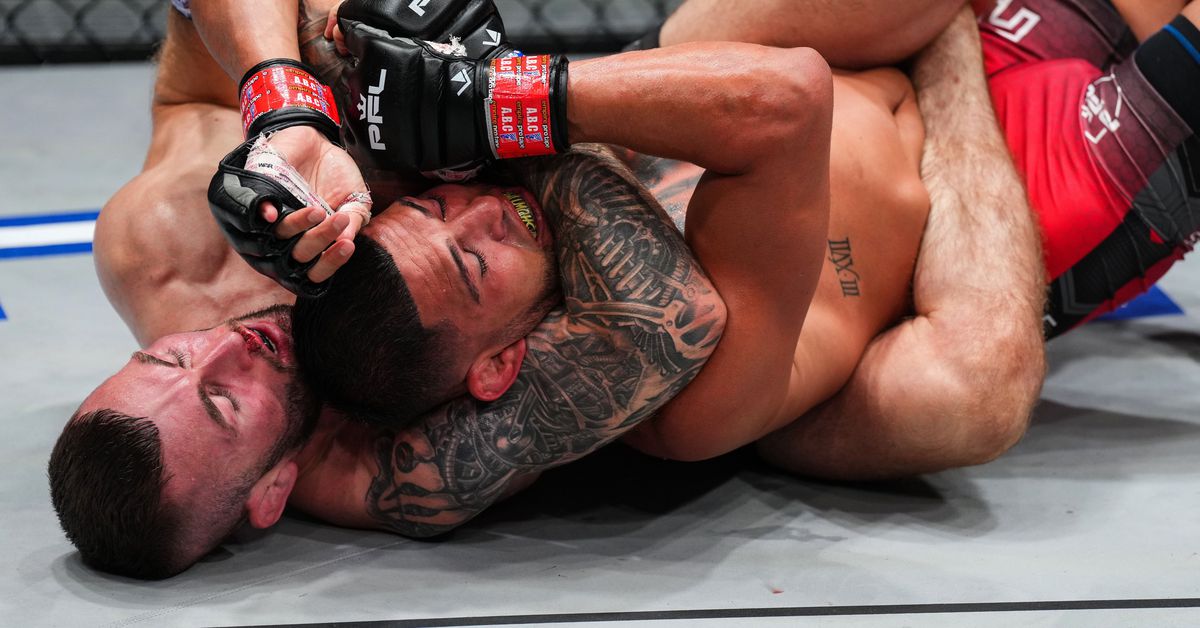 Stevie Ray did it again, though this time much less emphatically.

Ray outpointed Anthony Pettis to claim a spot in the 2022 PFL lightweight tournament finals on Friday night in the Hulu Theatre at Madison Square Garden. It was Ray’s second victory over Pettis in six weeks, having beaten him with a modified twister at PFL 5 to make it into the semifinals, but he had a much more difficult time with Pettis in the rematch, only managing to win a decision.

Ray once more dominated Pettis’ grappling. He secured takedowns, dominant positions in the first round, and threatened Pettis by a north-south choke, as well as another twister. However, the former UFC lightweight champion managed to survive this round’s grappling exchanges. “Showtime” was then able keep the fight alive and land some signature strikes in the third stanza. It was too little, too late for Pettis though, who lost 29-28 on all three judges scorecards.

The loss moves Pettis to 1-4 in the PFL, while the win secures Ray an opportunity at the lightweight season championship and $1 million.

Wild 1st round between Ray and Pettis! Round 2 up NOW! #PFLPlayoffs LIVE on ESPN & ESPN+
https://t.co/jPNvomkWj8 pic.twitter.com/3PnWq2bBwO

In the co-main event, Omari Akhmedov won a lackluster unanimous decision over teammate Josh Silveira to secure his spot in the light heavyweight finals. Akhmedov outworked Silveira over the course of 15 minutes, defending takedowns and outboxing his American Top Team teammate, to earn scores of 30-27, 30-27, and 29-28.

Josh Silveira perfectly times a takedown! Omari gets the fight back standing up. #PFLPlayoffs LIVE on ESPN+
https://t.co/jPNvomkWj8 pic.twitter.com/gSzt6aju8X

Josh and Omari hug it out to start the 3rd round. What score do you get at home? #PFLPlayoffs LIVE on ESPN+
https://t.co/jPNvomkWj8 pic.twitter.com/AaO92S93fv

Josh Silveira closes the 3rd round with a takedown! Official decision up next#PFLPlayoffs LIVE on ESPN+
https://t.co/jPNvomkWj8 pic.twitter.com/g5q6d8BMWi

Olivier Aubin-Mercier locks up Alex Martinez with a Body Triangle! Will he finish the fight in the 2nd round?! #PFLPlayoffs LIVE on ESPN+
https://t.co/jPNvomkWj8 pic.twitter.com/3VUCBtIPYQ

Robert Wilkinson started the evening off on a high note, finishing Delan Monte just 97 seconds into the first round and punching his ticket to the light heavyweight finals.

It was a vicious knee that got the job done for Wilkinson, who moved to 3-0 inside the PFL, all by way of stoppage. Wilkinson will face Akhmedov later in this year’s light heavyweight tournament.

Check out the full PFL Playoff 1 results below:

Itso Babulaidze def. Mahmoud Sebie by TKO (uppercut and punches) at 4:30 of Round 1