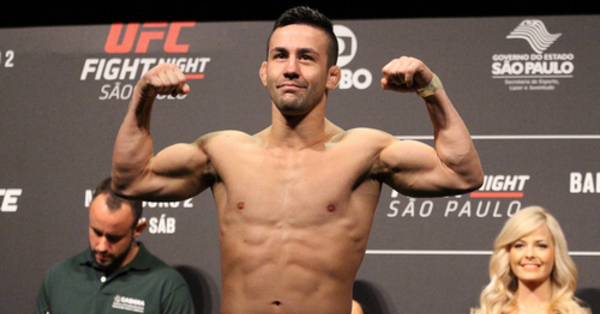 This weekend, the UFC is once again holding a tournament on its territory at the UFC APEX in Las Vegas (Nevada, USA). UFC on ESPN 15 doesn’t have the strongest card even for the COVID-19 era, but it could have been a lot more solid. First, ex-UFC welterweight champion Tyron Woodley refused to fight Colby Covington in the main event due to insufficient time to prepare for the fight, and then Yoel Romero withdrew from the fight against Uriah Hall in the co-main event.

In the main event of the evening, former UFC lightweight champion Edgar will make his bantamweight debut to take on Munoz, who tested positive for COVID-19 and kept the fighters out of action on July 15.

Edgar has been playing in the UFC for 13 years now, after losing the title in 2012, he dropped to featherweight, where he twice missed the chance to become a champion. Since 2018, the veteran has fought four fights, three of which he lost – if the champion Max Holloway passed Edgar on points, then Brian Ortega and Chung Chang Son knocked him out. Edgar’s only bright spot during this period is a convincing win against Cub Swanson.

Munoz was once considered the top bantamweight prospect, but now his record in the UFC is 8-4. True, the Brazilian lost in the octagon only to worthy: Rafael Assuncao, Jimmy Rivera, John Dodson and Aljamain Sterling. The latter ended Munoz’s three-fight streak last summer, including his biggest career success, knocking out former UFC champion Cody Garbrandt.

Munoz is a good, versatile fighter with a powerful punch, excellent boxing and dangerous chokes. However, Edgar is better as an athlete, he has a big advantage in footwork and wrestling skills. Edgar’s problem is that he has passed his peak and can no longer take a bunch of blows to the head without consequences.

If Edgar had moved up to 135 a few years ago, he might have had a chance of making it to the title shot. We predict that the fresher Munoz at the beginning of the fight will cleanly catch and “turn off the light” to the former champion. Edgar will turn 39 in October, and a defeat in this fight could push him towards retirement.

Munoz wins by knockout in the 1st round.