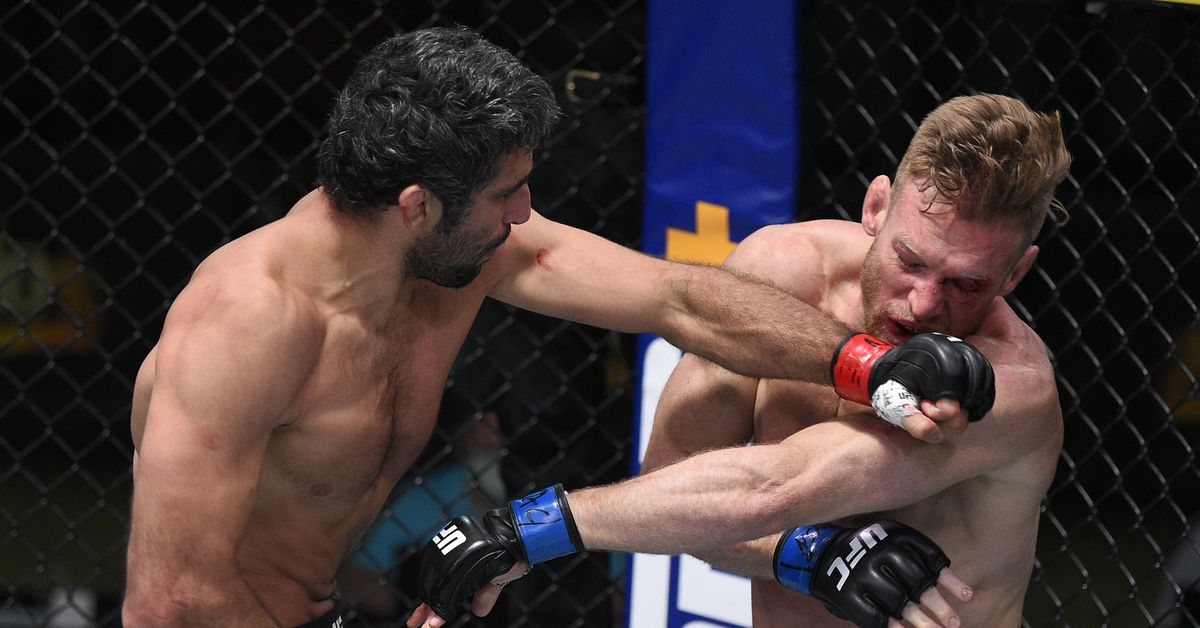 With an 11-fight winning streak that includes 10 finishes by knockout or submission, Charles Oliveira has cemented his place as the best lightweight in the world.

While he currently doesn’t hold UFC title after missing weight ahead of a recent win over Justin Gaethje, the 32-year-old Brazilian has still run roughshod over the best of the best at 155 pounds, including in statement wins over Michael Chandler and Dustin Poirier.

Right now, Oliveira is taking time off with plans to fight for the vacant lightweight title again in late 2022, but an opponent hasn’t been determined just yet. Many expect Islam Makhachev to receive the opportunity, but UFC color commentator Paul Felder, the last person to defeat Oliveira, actually believes there could be an even bigger threat looming near the top of the division.

“I’m retired so it can’t be me but I dare to say that someone like Beneil Daiush is more of an threat to [Charles Oliveira’s] certain style,” Felder said on The Fighter. The Writer.

” Is this because — and vice versa — when Khabib [Nurmagomedov] still existed, I also said the exact same thing — Charles was one of my biggest threats due to his style and how he wrestles with the bottom but is so dangerous from the top .”

According to Felder, it’s Oliveira’s unpredictability on the ground that could give wrestlers like Makhachev headaches. Dariush is a certified Brazilian Jiu-jitsu Practitioner and maintains an entirely different type of grappling.

“I think a guy like Charles, you’ve got to get somebody [like Dariush],” Felder said. “The way he ran through Tony [Ferguson] was impressive. I think Beneil [is a threat to Oliveira], even more so than [Islam] Makhachev, just because [Makhachev] going to try and wrestle him, and Charles he has a way around those kinds of exchanges.

“It does not matter how strong your takedown defense is against Charles Oliveira. He will find a way to your back. I’m going to throw a big Hail Mary out there and say my pick [to beat Oliveira] is Beneil Dariush.”

During his current seven-fight unbeaten streak, Dariush has scored two submission wins along with two jaw-rattling knockouts after he finished Drakkar Klose and Scott Holtzman in back-to-back performances.

As dangerous as Dariush remains on the ground, Felder sees his finishing power on the feet as another key in a potential fight with Oliviera.

” He can sure knock [Oliveira] off his feet,” Felder stated. “He’s a southpaw, he’s not afraid to stand. He can kick and is not afraid of biting his lips when things get tough. Charles is not the same. That fight .”

would be a great sight!

Dariush has been calling for a fight against Oliveira for the better part of the past year, especially after they were once scheduled to meet in 2020, but the matchup fell apart just weeks after contracts were issued by the UFC.

Dariush plans to return to fighting in the summer after sustaining a foot injury which prevented him from taking on Makhachev. There’s still no word on who he’ll draw once he’s booked again.