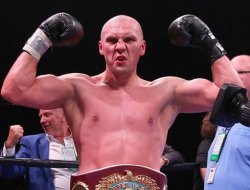 On January 21, a boxing evening will take place in Manchester (England), the main event of which will be a 12-round middleweight fight (up to 72.6 kg) between British Chris Eubank Jr. and Liam Smith.

Two accompanying fights from the main part of the upcoming boxing show were officially announced today.

In 2022, Riakpore scored early victories against Deion Juma and Fabio Turchi, while Glowacki limited himself to one performance in April, stopping the Mexican Francisco Rivas and thus closing two failures in a row in battles against Mairis Briedis and Lawrence Okoli.

Parker in the previous fight was knocked out by the British Joe Joyce, and Massey suffered the only loss in profiring from Riakpore, losing to him on points three years ago.