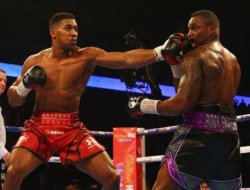 The underdog could well have upset the favorite, but during the fight he injured his shoulder – White lost by technical knockout in the 7th round. And Joshua already in the next fight took the IBF belt from the American Charles Martin and soon became the new hegemon of the division.

Hearn plans to give Joshua and White a rematch. Presumably it will take place at the end of March in Britain. But the whole truth is that the fans are not very turned on by this fight. Promoter
trying convince us: “So, why do I want to do this fight? Because it’s a huge event. This is a duel between two Londoners who are currently 1-1 in head-to-head fights (White defeated Joshua in the amateurs). And they don’t really get along with each other.”

According to the promoter, “As of today, Joshua has only two options that would be bigger than a rematch with Whyte: fights against Tyson Fury and Deontay Wilder. And if those options aren’t realistic, then White remains the obvious top choice. I’ll tell you how it is. I want to do this rematch and the other two fights too. I believe that everything will work out for us.”

At the start of the week, Wilder accepted Joshua’s challenge. The Briton was told in response that they were ready to fight Deontay even in March. The manager of the American does not understand why Joshua is fighting White.