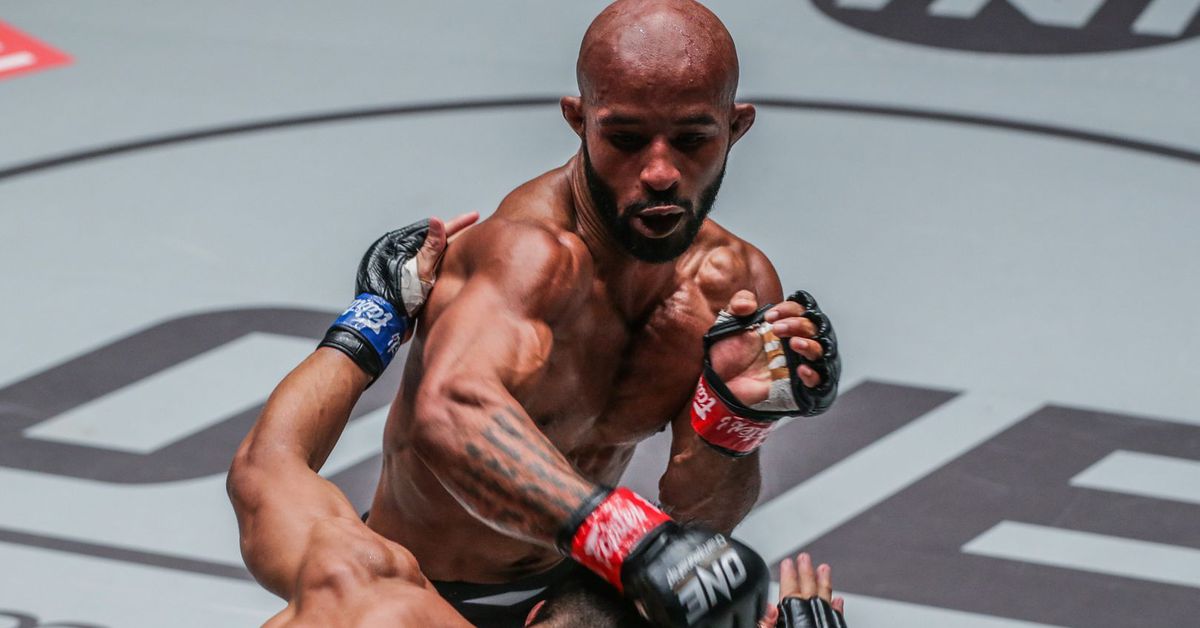 ONE Championship celebrated its 10-year anniversary with a martial arts extravaganza Saturday in Singapore. In a card filled with MMA, muay thai and kickboxing contests, Angela Lee closed the show with a bang.

Defending her atomweight belt versus tournament winner Stamp Fairtex in the main event, Lee had to survive an early scare courtesy of a body shot, but relied on her grappling to dominate the rest of the bout. Lee took Fairtex’s back but couldn’t secure the finish in the opening round.

The second stanza began and Lee had the triangle choke locked, but somehow Fairtex escaped. Lee went for the back and tried a twister, but still couldn’t forced Fairtex to give up. With seconds left in the clock, Lee finally had a finish in, tapping Fairtex with a rear-naked choke.

In the co-main event, Demetrious Johnson took on decorated striker Rodtang Jitmuangnon in a special-rules fight with four three-minute rounds, with first and third rounds under muay thai rules, and the others being contested in MMA rules.

Jitmuangnon had sold three minutes in the muay thai portion, connecting the better strikes. Johnson clearly lost the exchanges but hung in there, making out of the round.

The MMA portion started and “Mighty Mouse” patiently circled and waited for an opportunity to shoot. The opening came when Jitmuangnon threw a kick, and Johnson got him on his back and quickly worked for a rear-naked choke. Jitmuangnon survived for a few seconds and refused to tap, getting choked out with 47 seconds left in the clock.

Adriano Moraes, the last man to defeat Johnson in MMA, successfully defended his flyweight title against Yuya Wakamatsu. After a pair of very technical rounds, where Moraes landed a solid flying knee and Wakamatsu connected a good right hand — and referee Mohamad Sulaiman insisted on asking for action —, “Mikinho” made Wakamatsu pay for his mistake in a takedown attempt in the third, locking a guillotine choke and forcing the challenger to tap.

A highly-anticipated battle between Japanese legends Shinya Aoki and Yoshihiro Akiyama delivered. Aoki, victorious in his past four, rushed for a single leg takedown and spent nearly five minutes on Akiyama’s back on the feet, working on rear-naked chokes and punches, but couldn’t get his forearm under Akiyama’s chin.

The tide turned in the second stanza after Aoki came up short in securing takedowns again, being forced to stand and trade with the 46-year-old. Akiyama landed a right hand that hurt Aoki, following up with a vicious knee to the head as Aoki was sitting, which is legal under ONE rules. “Sexyama” kept landing punches until Aoki was saved by the referee.

Asked what’s next after a big stoppage victory, his second straight in ONE, Akiyama said he will “bring more sexy to the fights.”

“Mighty Mouse” wasn’t the only MMA fighter to compete in different rules at ONE X, as Eduard Folayang, a former ONE lightweight champion, took on experienced muay thai star John Wayne Parr for Parr’s retirement match. And just like Demetrious Johnson, Folayang came out victorious in his trip to a different sport.

Folayang threw a dozen spinning attacks in the opening round, mainly hook kicks, while Parr focused on working with leg kicks. Round two started and Folayang hurt Parr with a right hand, and Parr had no answer from the most part after that. With a minute left in the third round, however, Parr landed a flying knee that turned the fight into a brawl until the final bell rang. Folayang survived the late scare to win via unanimous decision.

The pay-per-view opener featured a featherweight rematch of ONE kickboxing champion Superbon Singha Mawynn and Marat Grigorian, with Mawynn successfully defending his belt and avenging the loss via unanimous decision.