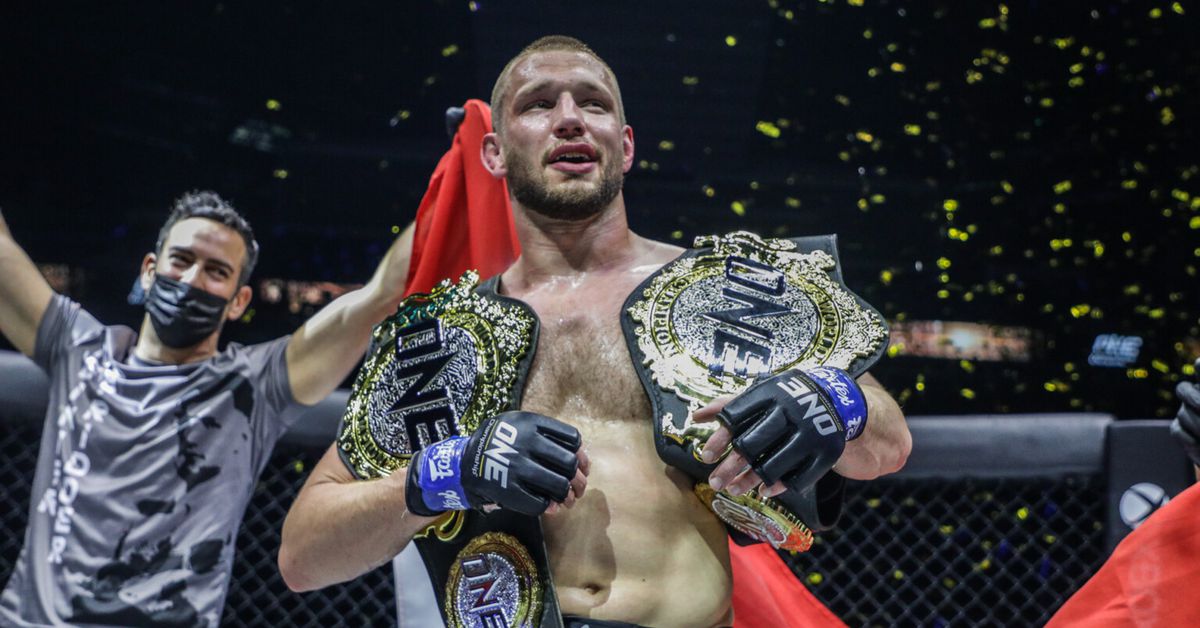 Reinier de Ridder remains a double king in ONE Championship after defending his middleweight throne in dominant fashion against welterweight titleholder Kiamrian Abbasov at Friday’s ONE: Full Circle in Singapore.

De Ridder took Abbasov to the ground in no time and got to side control within seconds. Abbasov tried his best to live. He continued to pressure Abbasov with his grappling in the second round, getting to the mount and locking an arm-triangle choke but time ran out before the tap.

The two-division champion achieved a takedown just seconds into the third section. He quickly got the mount and locked the arm-triangle choke once more. Abbasov was forced to quit this time.

Now 15-0 in MMA, De Ridder said in his post-fight interview he wants to face “and choke out” jiu-jitsu legend Andre Galvao — who just signed with ONE Championship — and also move up to heavyweight for another belt, vowing to beat champion Arjan Bhullar and interim titleholder Anatoliy Malykhin.

” I beat both the welterweight and middleweight champions, as well as the light heavyweight champ. What’s next?” De Ridder said. “Heavyweight, guys. Come on. Come on. Let me fight Malykhin and let me fight Bhullar the next night. I’ll finish these guys on the same night. Let’s go.”

The second-to-last MMA fight of the night had Aung La N Sang and Vitaly Bigdash colliding for a third time inside the ONE cage after a 1-1 run in 2017. Bigdash’s grappling proved too difficult for the two-division champion.

Ex-champ in ONE Bigdash controlled the action throughout the three rounds with takedowns. He took the back multiple times, got to the mount and was able to control the action but fell short of his submission attempts. In the end, the Russian talent won via unanimous decision to score his third straight victory and call for a shot at de Ridder.

“De Ridder, you’re next,” Bigdash said after the victory. “I’m breaking your face. Your nose is being broken. Boom. You’re next.”

The early portion of the show saw devastating finishes for Fabricio Andrade, Zebaztian Kadestam and Drex Zamboanga in MMA bouts, all of whom walked through their opposition inside one round.

Andrade moved one step closer to the bantamweight belt with a 97-second victory over Jeremy Pacatiw, stopping him with a brutal knee to the body. Kadestam, who missed weight for his clash with Valmir da Silva, dropped him with a combo in under 90 seconds. Zamboanga went even faster, knocking Rahul Raju unconscious with an uppercut in just 65 seconds.

Check out the finishing touches below.

“The Bandit” is BACK! Zebaztian Kadestam TAKES OUT Valmir Da Silva with a smooth two-punch combo #ONEFullCircle #WeAreONE #ONEChampionship

Drex Zamboanga puts Rahul Raju to SLEEP with a nasty uppercut in the opening bout of ONE: FULL CIRCLE! #ONEFullCircle #WeAreONE #ONEChampionship

Check the complete ONE Full Circle results below.